With Appeal to Liberty, Ted Cruz Jumps Into 2016 Race for President 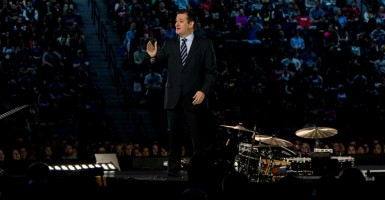 And then the junior senator from Texas explicitly asked them to imagine him as the nation’s next president.

“I believe in you,” Cruz said. “I believe in the power of millions of courageous conservatives rising up to reignite the promise of America, and that is why today I am announcing that I’m running for president of the United States.”

Speaking this morning at Liberty University in Lynchburg, Va., and asking his listeners to “stand together for liberty,” Cruz became the first major Republican candidate to announce a bid for the nomination and his website went into campaign mode. (At this juncture, no Democrat has announced, though Hillary Rodham Clinton is expected to do so next month.)

Cruz, a favorite of tea party conservatives elected to the Senate in 2012, used the word “imagine” 38 times and was interrupted by applause more than 50 times during his 30-minute announcement speech, according to a transcript of his remarks. (His remarks begin at 4:35 and end at 34:50 in the video below.)

Cruz, 44, opened by devoting nearly a third of the speech to a detail-laden retelling of his family story, a narrative that moved from darkness into light because, he said, God was there and so was the American Dream. (In short: Alcohol nearly destroys his Cuban father’s triumphant new life in America until, after leaving his wife and young Ted, the senior Cruz finds Jesus and turns his life around.)

“These are all of our stories. These are who we are as Americans,” Cruz said. “And yet, for so many Americans, the promise of America seems more and more distant.”

Most of the policy issues that the Texas Republican touched  on—repealing “every word” of Obamacare, stopping “executive amnesty” for illegal immigrants, enacting a flat tax, abolishing the IRS, protecting religious liberty, human life and “the sacrament of marriage”—make up the red meat of a stump speech he has been honing for months.

Imagine a federal government that stands for the First Amendment rights of every American!

It was his windup that pulled it all together:

This is our fight. The answer will not come from Washington. It will come only from the men and women across this country, … from people of faith, from lovers of liberty, from people who respect the Constitution.

It will only come as it has come at every other time of challenge in this country, when the American people stand together and say we will get back to the principles that have made this country great. We will get back and restore that shining city on a hill that is the United States of America.

Cruz’s announcement gives him more visibility as he seeks to break out of the back of the prospective GOP pack, currently led by Wisconsin Gov. Scott Walker and former Florida Gov. Jeb Bush, as charted by the Real Clear Politics average of early polls.

National Journal reported that Cruz appeared in Liberty’s Vines Center as part of a weekly convocation for which attendance is mandatory for some 10,000 students. Silently protesting fans of Sen. Rand Paul, R-Ky., set to announce his own candidacy April 7, sat together in their “I Stand With Rand” T-shirts as Cruz spoke.

In his characteristic courtroom style, the Harvard-educated lawyer and former solicitor general of Texas was free of a podium and at ease pacing the lip of the stage in a dark suit and striped tie.

The power of the American people when we rise up and stand for liberty knows no bounds. #MakeDCListen

What was most apparent in this speech was how often Cruz name-checked God and referred to biblical faith.

Cruz, a Southern Baptist, salted his remarks with faith-friendly phrases such as “God transformed his [father’s] heart,” “the transforming love of Jesus Christ,” rights that “come from God Almighty,” “the grace of God,” “God’s blessing,” and “God isn’t done with America.” At one point, he said:

Today, roughly half of born-again Christians aren’t voting. They’re staying home. Imagine instead millions of people of faith all across America coming out to the polls and voting our values.

The biggest applause line came when he asked the audience to imagine replacing  “a president who boycotts [Israeli] Prime Minister Netanyahu” with “a president who stands unapologetically with the nation of Israel.”

Some people wonder if faith is real. In my family, there’s not a second of doubt: http://t.co/K4IKnbKIm2

Wrapping up, Cruz drew laughter from the mostly Christian audience when he asked listeners to “break a rule” by taking out their cell phones and texting his campaign either the word “Constitution” or the word “imagine”—a move that could reap thousands of new contacts.

Cruz’s wife Heidi and their two young daughters joined the newly minted presidential candidate on stage before he slowly made his way off, signing autographs along the way.