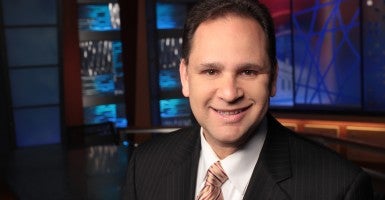 David Brody will serve as a contributor to The Daily Signal. (Photo courtesy of David Brody)

Veteran news reporter David Brody is joining The Daily Signal as a contributor to cover the 2016 presidential election.

“We have assembled a top-notch news team that combines well-regarded veterans and some of the best new journalistic talent in Washington,” said Daily Signal Publisher Geoff Lysaught. “The addition of David as a contributor demonstrates The Daily Signal’s continued commitment to covering the most important political news at the highest standards of journalistic integrity.”

Brody joined CBN News in 2003. He regularly breaks news on “The Brody File,” a weekly 30-minute show and blog on issues relating to faith and politics. David Brody joined CBN News in 2003, interviewing some of the biggest names in politics. (Photo courtesy of David Brody)

He previously served as news director at KRDO-TV, an ABC affiliate in Colorado Springs, Colo., where he was awarded an Emmy in 1989. He’s also done work for WUSA-TV in Washington, D.C., and KUSA-TV in Denver.

Brody grew up in New York City and graduated from Ithaca College in New York. He is married with three children.