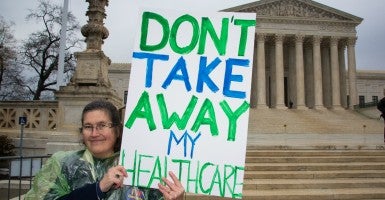 Last week, the Department of Health and Human Services issued a two-page “fact sheet” that stated:

14.1 million adults who gained health insurance coverage since the beginning of open enrollment in October 2013 … through Mar. 4, 2015. Over that period, the uninsured rate dropped from 20.3 percent to 13.2 percent – a 35 percent (or 7.1 percentage point) reduction in the uninsured rate.

The problem is that the wording gives the misleading impression that because 14.1 million people got coverage, the uninsured rate decreased by 7.1 percentage points.

Yet, the separate “Technical Notes: Data and Methods” the department issued with its fact sheet makes it clear the reverse is the case. The more accurate statement would have been: “Based on answers to its surveys, Gallup estimates that during this period the uninsured rate decreased by 7.1 percentage points. We used Gallup’s estimate as the basis for extrapolating that 14.1 million adults gained coverage. We further assume all of those estimated 14.1 million individuals gained coverage as a result of the Affordable Care Act.”

The difference between Health and Human Services’ claims and how the agency derived its headline numbers shows the problem with treating estimates derived from survey data as roadmaps to reality. To understand what really happened you instead need to look at the relevant administrative data.

For example, you could use responses to consumer surveys as the basis for estimating the approximate number of pickup trucks purchased last month. But to get a true picture, you would need to look at the administrative data from dealers reporting how many pickup trucks they actually sold.

When it comes to measuring Obamacare’s effects on health insurance coverage, the relevant administrative data are the reported enrollment figures for: 1) Medicaid and the Children’s Health Insurance Program; 2) private employer group plans, and; 3) the private non-group (or individual) health insurance market.

So, what can—and can’t—the administrative data tell us about Obamacare’s performance?

This data does not tell us how many would have qualified for Medicaid without the Affordable Care Act’s expansion, but that number likely is equivalent to the modest enrollment growth reported in the non-expansion states. Consequently, we can be confident almost all the observed increase in Medicaid enrollment can be attributed to the Affordable Care Act’s expansion of Medicaid eligibility.

Private market data, which comes from quarterly reports health insurers file with state regulators, shows 5.8 million people gained coverage through the individual market during the first three quarters of 2014. The data doesn’t tell us how many of those enrollments were through the new Obamacare exchanges, but given that the individual market expanded by nearly 50 percent in nine months, it’s reasonable to attribute most of that increase to the Affordable Care Act as well.

When it comes to employer group coverage, the picture gets more mixed.

Over the same period, enrollment in fully insured employer plans—meaning group policies employers purchase from insurers—decreased by 6.3 million individuals, but enrollment in self-insured employer plans grew by 1.4 million individuals. That means 4.9 million fewer Americans had employer group coverage. So if we subtract the 4.9 million Americans who lost group coverage from the 5.8 million who gained coverage through the individual market, we are left with a net gain in private coverage of slightly less than 900,000 people for the first nine months of 2014.

Looking closer, the 6.3 million-person enrollment drop in fully insured employee plans represents a sudden 10 percent decline in a market that previously had been eroding by about 1 percent to 3 percent a year. In contrast, the 1.4 million more individuals in self-insured plans equates to enrollment growth of about 1.5 percent in a market that, prior to Obamacare, was growing at about 1 to 3 percent a year—putting that uptick solidly within the pre-Affordable Care Act trend range.

Thus, the data indicates Obamacare likely was responsible for a significant additional decline in fully insured employer group coverage. But, with respect to another anticipated effect—the expectation that more employers will shift to self-insured plans to escape Obamacare’s costly benefit mandates—the data does not indicate that is yet occurring to any noticeable extent. The modest enrollment increase in self-insured employer plans could well be the result of other factors, the most likely being increased job creation as the economy continues to recover from the last recession.

Taken together, the administrative data tell us that the number of Americans with health insurance coverage increased by around 9.7 million individuals during 2014—not the 14.1 million estimated by Health and Human Services.