The Problems With New Study ‘Showing’ Liberals Are Happier Than Conservatives 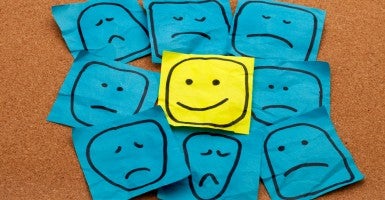 After equality, science is the greatest authority we look up to. As such, the release of any study, no matter how mindless its methods or trivial its findings, is greeted by the press like an oracular pronouncement.

Last week, for example, the magazine Science published a study which found that “Conservatives report, but liberals display, greater happiness.” A quick search through Google News reveals more than a hundred news stories about it, including articles in The New York Times, The Washington Post and Time (to its credit, The Wall Street Journal chose to ignore the study).

The nature of happiness is a question that has preoccupied—and eluded—some of the greatest minds. Aristotle reasoned about human nature and its place in the cosmos. Aquinas reflected on the nature of God and man’s place in the divine order. Now come the authors of this study, who measure happiness, among other ways, by the prevalence of happier emoticons on Twitter and more “intense facial action in the muscles around the eyes” in one’s LinkedIn profile pictures.

To their credit, the authors acknowledge that “it would be a mistake to infer from our data that liberals are ‘objectively’ happier than conservatives.” All they claim to have discovered is that “political liberals exhibited more frequent and intense happiness-related behavior than political conservatives.” Because our social science cannot grasp the nature of happiness, it restricts itself instead to the study of frivolity, which it labels “happiness-related behavior.”

The Limits of Conservatism

Even if one were to grant the researchers their own tenuous conclusion, the study would not prove that conservatism or liberalism are the cause of these varying degrees of happiness and of happiness-related behavior. As any student learns on the first day of Stats 101, correlation is not causation. For example, the divorce rate in Maine correlates almost perfectly with per-capita consumption of margarine in the United States.

Given the inherently limited nature of the conservative worldview, it is in fact doubtful that it could, on its own, make conservatives happy. Conservatism is a political theory—not a comprehensive philosophy. It does not purport to answer life’s most important questions. In fact, it refuses to do so, believing that such matters are the proper domain of religion or philosophical inquiry.

In other words, you cannot simply be a conservative. You can have a conservative temperament and espouse conservative political positions, but conservatism, on its own, cannot and does not pretend to define a person. For example, Bill Buckley’s Catholic faith loomed larger in his life than his conservatism. As my colleague, Lee Edwards, likes to say: “Man does not live by politics alone.”

Liberalism, by contrast, has broader reach. While it does not claim to be a comprehensive way of life—in fact, it aspires to be resolutely non-judgmental in matters of private conduct—it does seem to function as one for many liberals. If, as some have argued, modern liberalism is a secular religion which gives the religious impulse a non-theistic outlet, then one would expect to find many liberals who espouse liberalism with religious zeal. A visit to any elite college campuses provides ample confirmation that this is indeed the case.

Ultimately, of course, human nature cuts across political divisions. Liberals, like conservatives, will by and large find their happiness in family, friendship, faith, vocation, and community. While it’s certain that your political ideology will affect how you perceive these realms—for example, is marriage a sacred union or a repressive patriarchal institution?—such an analysis lies beyond the purview of the social sciences.

To understand the influence of our political ideologies on happiness would require us to think about how particular ideas shape the mind and characters of citizens. As John Locke wrote: “The ideas and images in men’s minds are the invisible powers, that constantly govern them; and to these they all universally pay a ready submission.” In this regard, Plato, Publius and Tocqueville are surer guides than Twitter feeds.

Should Governing Be Fun?

Ultimately, the study’s greatest flaw lies in its complete failure to recognize the seriousness of statecraft. For one of their measures of happiness, the researchers looked at the prevalence of emotional language in the Congressional Record and of smiling behavior in the “Congressional Pictorial Directory.” They found “it was liberal politicians who tended to more frequently express positive emotional language, smiling more intensely, and smile more genuinely.”

It is one thing to wonder whether liberal citizens are happier than conservative citizens, and quite another to suggest that deliberating about the highest affairs of state should be fun. Members of Congress swear an oath to “support and defend the Constitution of the United States against all enemies, foreign and domestic.” On their shoulders rests the great burden of administrating the affairs of the government.

Why should reading daily intelligence reports on the latest weapons acquisition by ISIS make a congressman happy? Why should attending a classified briefing on the progress of Iran’s ballistic missile tests make a member of the House of Representatives smile? And why should a senator use “joviality-related words” in a floor debate about the $50 trillion in unfunded liabilities for Medicare and Social Security?

Given the momentous challenges facing the country and the current state of the world, it would be unbecoming of an elected official to discharge his official duties in a gleeful manner. The U.S. Congress is not the Del Boca Vista condo board.

While we Americans believe that all are entitled to pursue happiness, we should not be so childish as to believe that some must not sacrifice part—if not all—of their happiness for us to enjoy ours.