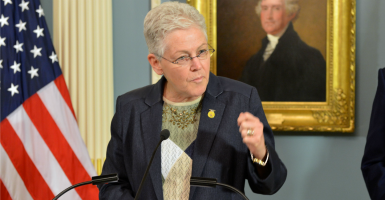 Speaking before the National Farmers Union annual convention this week, EPA Administrator Gina McCarthy attempted to assure the group about the joint EPA and Army Corps of Engineers proposed rule defining what waters are covered under the Clean Water Act. “Let me be clear,” she said, “because that’s what the final rule will be.”

If the proposed rule is any indication, the only thing that will be clear is almost any water in the country will be covered under the Clean Water Act.

Actually, being jurisdictional means a lot and is the very foundation of the statute. Jurisdictional means those waters would be regulated under the Clean Water Act. There’s a reason why everyone from farmers to local governments are concerned about what waters are covered, and it isn’t because they want to pollute or destroy waters. They want to engage in critical activities which, if the proposed rule is finalized, could require them to get costly permits.

Under the proposed rule, the EPA and Corps would deem nearly any type of water to be jurisdictional. For example, the new proposed rule would regulate all ditches, except in narrow circumstances. The rule would apply to tributaries that have ephemeral flow and depressions in land that contain water only when it rains. Further, the rule is so vague that property owners probably should assume a water body is covered under the law, unless it falls under one of the limited exceptions in the rule.

This overreach means that property owners will be required to secure far more permits than ever before. McCarthy makes it sound as if this isn’t a big deal because, after all, according to her, these individuals and businesses just want to pollute. Even the connotation of pollute is misleading because it suggests, for example, some business dumping toxic waste in a pristine water. Her statement is both misleading and insulting.

The definition of “pollutant” in the Clean Water Act is extremely broad and doesn’t just cover what one might assume to be a pollutant. For example, under the law, the EPA can levy penalties and criminal charges for discharging a “pollutant” such as sand into covered waters. If there is a discharge of dredged material (material excavated or dredged from waters of the U.S.) or fill material (“material placed in waters such that dry land replaces water—or a portion thereof—or the water’s bottom elevation changes”) in a covered water, this could require a permit.

Americans from across the country and in various capacities will be required to secure permits. If you build it, the EPA will come. In fact, the EPA itself states that if you plan to perform construction work in a covered water, you likely will need a permit. Farmers and ranchers often will need permits.

Building a home could require a permit. A 2012 Supreme Court case, Sackett v. EPA, highlights an egregious instance of regulatory enforcement whereby the EPA sought to impose fines of $7,500 a day on a couple for placing gravel on virtually dry land to build a home in a built-out subdivision. Even critical infrastructure projects such as building a dam or highways could require additional permits.

Farmers and ranchers, manufacturers, home builders, local governments (the list is virtually endless) don’t “want to pollute or destroy a jurisdictional water.” They just want to engage in the activities they always have without this excessive federal overreach. It may be understandable that the EPA has to resort to verbal attacks against the public, including private property owners, since there’s no defense for its proposed rule. It doesn’t justify it though.