Should Teachers Be Paid Based on Student Performance? What This New Study Shows. 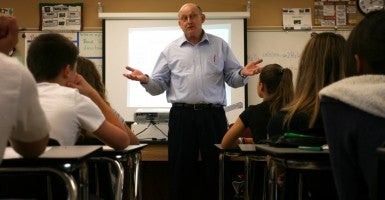 There are long term benefits to paying teachers by how well students perform in the classroom, according to a new study released by Israeli economist Victor Lavy.

The author analyzed current income and demographic data for a set of students who graduated from high schools that were part of a trial program that paid teachers according to their students’ performance on standardized tests during 2000 and 2001. Lavy compared the educational attainment and yearly earnings of students in schools who participated in the program to their peers at comparable schools who did not.

The pay-for-performance program raised tests scores. It also apparently helped students in other ways. Graduation rates rose, and college enrollment rates were 5.5 percentage points higher. The number of years of post-secondary education completed by students in the trial program was 63 percent higher than among their peers in the control group.

As adults, the students from pay-for-performance schools earned 7 percent more than the control group. They were also 2 percent less likely to need unemployment benefits during the measurement period.

The benefits cited here were measured across students from the entire trial-program school, not just those whose teachers won the performance bonuses.

Lavy’s study shows long-run benefits of paying teachers by how well they teach. The results are supported by economic theory and prior research. In a 2010 paper, Eric Hanushek found that good teachers dramatically improve the lifetime earnings of their students. Lavy’s new work shows that paying teachers according to student results helps students learn more in the short term and increases their economic prospects in the long run.