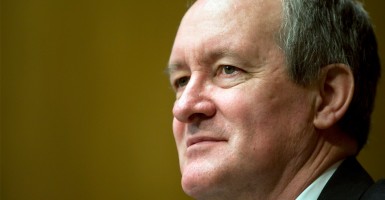 Sen. Mike Crapo, R-Idaho, is set to offer an amendment that aims to defund the Justice Department’s Operation Choke Point.

The Daily Signal has exclusively learned that Sen. Mike Crapo will offer an amendment Thursday to the Senate’s budget proposal that would defund the Justice Department’s controversial program known as Operation Choke Point.

“The Department of Justice must not politicize its enforcement policies, and we must not let Operation Choke Point become an end run around the Second Amendment by threatening the financial security of gun and ammunition manufacturers,” said Crapo, R-Idaho, in a statement to The Daily Signal.

In Idaho, we have heard from several business owners involved in the guns and ammunition business who experienced difficulty finding essential banking services as a result of this fear and uncertainty on the part of the banks.

Crapo’s measure would be the strongest effort yet to shut down the program by creating a “deficit-neutral reserve fund” that authorizes Congress to end Operation Choke Point in the future with fewer procedural hurdles.

Norbert Michel, The Heritage Foundation’s expert in financial regulations, said, “This is great news and shows that Congress is making progress toward stopping the program. Gun owners should be happy, but Choke Point targeted many lawful businesses outside of the gun industry.”

The program was originally designed in 2013 as a way to stamp out consumer fraud, but has since come under fire for denying legal business owners access to the financial sector.

The introduction of Crapo’s measure before the Senate Budget Committee will mark the first time since the start of Operation Choke Point that committee members will be forced to go on the record regarding their stance on the program.

If the Banking Committee approves Crapo’s amendment, it would then move to the Senate floor for a full vote as an amendment to the budget proposal.

Crapo has been an outspoken critic of Operation Choke Point.

Last year, he released a statement saying the program “has morphed into an attempt to shut down entire industries of law-abiding and legitimate merchants.” He also sent a letter to Attorney General Eric Holder expressing “strong concerns” about its impact on merchants, financial institutions and consumers.

Since then, The Daily Signal has reported on multiple instances of banks and third-party payment processors suddenly refusing to do business with long-time customers—all lawful business owners.

Many of those business owners happen to sell guns.

The Justice Department, on the other hand, maintains that it has “no interest in pursuing or discouraging lawful conduct.”

But in 2011, the Federal Deposit Insurance Corporation (FDIC) created a list, subsequently adopted into Operation Choke Point, which labeled a range of both legal and illegal industries “high risk.” The agency advised banks against doing business with those enterprises.

Next Tuesday, FDIC officials will face questions before the House Subcommittee on Oversight and Investigations about its involvement in Operation Choke Point and why citizens—specifically in the firearms sector—don’t have access to some basic financial services.

The hearing will be led by Rep. Sean Duffy, R-Wis., who told The Daily Signal his goals are to find out “who was involved,” “how high does it go,” and whether “anyone has been held accountable.”

“The countless people who have been impacted by this deserve those answers,” Duffy said.

This post has been updated to reflect the Budget Committee’s vote.