Conservatives to Party Leaders: Show Us a ‘Strategy’ and We Will Fight for You 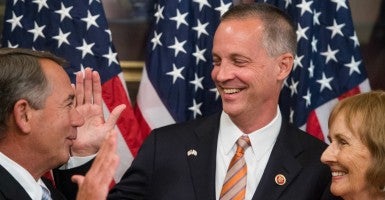 In their first confrontation with Republican leadership this Congress, conservatives lost.

As Congress faces contentious upcoming decisions on issues such as Medicare payments to doctors, the Highway Trust Fund, the Export-Import Bank and the debt ceiling, conservatives indicated today they would continue to be combative until GOP leadership shows it has a “strategy” on how to govern.

“Every time we disagree with leadership, you guys are told by leadership we’re just disagreeing on tactics,” said Rep. Raul Labrador, R-Idaho, at today’s Conversations with Conservatives event on Capitol Hill.

What are the four, five, six things that we are going to do that are going to be different from when Harry Reid was in control, and from when President Obama is in the White House? So far the only answer has been the Keystone Pipeline. If that’s our vision for America, I’m sorry, we’re screwed.

“So far the only answer has been the Keystone Pipeline,” says @Raul_Labrador of GOP leadership’s strategy. “If that’s our vision for America, I’m sorry, we’re screwed.”

Conservatives say they will especially judge how Republican leadership addresses the pending fight over the debt ceiling.

In October or November, the Treasury Department is expected to run out of “extraordinary measures” to keep paying the government’s bills.

Rep. Curt Clawson, R-Fla., a freshman lawmaker, argued that conservatives will have to be more accepting of compromise in order to see any meaningful change.

“I have no interest in calling out people on the same side because we do too much of that and we will lose the White House the next time around,” Clawson said. “I am a conservative vote but I like to look at financial matters in a rational way. What I would like to see on the debt ceiling, on the budget, is for our group to have a seat at the table, to be a part of the solution. Not everybody gets what they want, and as a party we can win again.”

After hearing Clawson’s perspective—and acknowledging he agreed with the Florida lawmaker—Labrador took a more subtle position, emphasizing he would “fight” for leadership if it embraced bolder reforms.

“Show me a vision of where you want to go,” Labrador said. “It might be a different tactic, it might be a different way of doing it than I would do it, but if we can actually get to raise the debt ceiling—because we have to, because if you look at the financial situation, we have to raise the debt ceiling—and you can actually get some structural changes, whatever those structural changes are that leadership wants to fight for, I am willing to fight for those as well.”