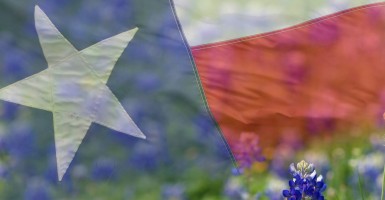 They say everything is bigger in Texas. Some argue that the saying even applies to the state’s local governments.

Conservatives often contend that more decision making should be done at the local level, but what if local governments overreach their authority?

Texas Gov. Greg Abbott, a Republican, has been vocal about his opposition to what he characterizes as an overabundance of regulations implemented at the local level in his state.

During remarks at the Texas Public Policy Foundation’s 13th annual Policy Orientation in January, Abbott said that “the truth is, Texas is being California-ized with bag bans, fracking bans, tree-cutting bans…We are forming a patchwork quilt of bans and rules and regulations that are eroding the Texas Model.”

“Large cities that represent about 75 percent of the population in this state are doing this to us. Unchecked over-regulation by cities will turn the Texas miracle into the California nightmare,” Abbott continued.

”We are forming a patchwork quilt of bans and rules and regulations that are eroding the Texas Model,” says @GregAbbott_TX.

In an interview with The Daily Signal, James Quintero, the director of the Center for Local Governance at the Texas Public Policy Foundation, elaborated on what Abbott calls the “Texas Model.”

Quintero said that while these policies contribute to Texas’ success at the state level, “too many” local governments are “running afoul” of the principles.

For example, the city of Dallas issued a ban on plastic and paper bags, mandating that residents use reusable bags or pay a nickel for each disposable bag they use—a measure Quintero says is in violation of existing state law.

“I’m a rule of law guy,” Quintero said. “You can’t have a situation where local governments flout existing state law.”

If a city or county wants to implement a regulation or ordinance that goes against existing law, then Quintero says there should be “a robust debate at the Capitol.”

Cities are “subsidiaries” of the state, and must “respect” state laws, he said. Reasserting the “primacy” of state laws protects “core conservative principles.”

“Liberty is the principal, local control is the preference,” Quintero said. “It all comes down to the proper role of government: protecting life, liberty and the pursuit of happiness.”

Tom “Smitty” Smith, the Texas director of Public Citizen, told the San Antonio Express-News that Abbott is being hypocritical and “talking out of both sides of his mouth.”

“On one hand, when it comes to the federal government telling states what to do, he says ‘local control,’” Smith said. “And so we now have Greg Abbott declaring the state is more powerful than cities or local communities and their desires.”

In an interview with The Daily Signal, Smith likened the governor’s comments to a “Stalinist dictatorship.”

“[Abbott] is running around suing the Obama administration advocating for state rights, but when it comes to citizens going to their cities, he claims they shouldn’t have that right,” Smith said.

Smith is unconcerned about regulations varying from city to city or county to county.

“Welcome to America,” he said, adding that Austin is one of the fastest growing cities in America “in terms of business development,” despite local ordinances such as bag bans.

One state senator has introduced legislation affirming the preeminence of state laws over local ordinances.

Tyranny at the local level is just as bad as tyranny from Washington D.C. or a foreign dictator. #txlege

Sen. Don Huffines, R-Dallas, authored SB 343, which if passed, would mandate that:

Huffines told The Daily Signal that some “overzealous political subdivisions” have “improperly restricted economic activity by defying state laws that are designed to foster free enterprise and economic freedom.”

“Cities must not get away with undermining or contradicting state law. Local control is not a blank check,” Huffines said.

Matt Langston, Huffines’ chief of staff, added that the bill was “pro-business,” and the office is receiving a great deal of positive feedback from constituents.

Some organizations, such as Equality Texas, oppose the legislation on the grounds that it would undo local non-discrimination ordinances—which may or may not have a state-level counterpart.

The Texas Municipal League, an organization that exists to “to serve the needs and advocate the interests of cities and city officials” said in a statement that cities are “the government closest to the people:”

“Cities provide the services that we cannot do without,” the statement reads. “Those services reflect the will of the local taxpayers. They are not the kind of services people think of when they say they want less government. Put simply: City services are the nuts and bolts of our society.”

SB 343 has been referred to the Senate Committee on State Affairs.