Is Obama Sidestepping Congress and Going to UN on Iran Deal? 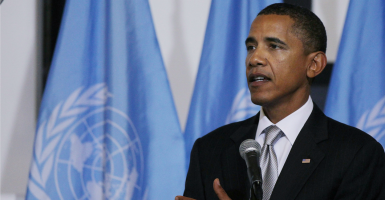 The letter to Iran signed by 47 Republican senators has provoked a lot of commentary—and some welcome clarification on the White House’s negotiations with Iran.

The letter argued that any deal President Obama makes with Iran isn’t binding past his second term.  “[W]e will consider any agreement regarding your nuclear-weapons program that is not approved by the Congress as nothing more than an executive agreement between President Obama and Ayatollah Khamenei,” wrote the senators. “The next president could revoke such an executive agreement with the stroke of a pen and future Congresses could modify the terms of the agreement at any time.”

During testimony on Wednesday, Secretary of State John Kerry told lawmakers that the U.S. is not negotiating a “legally binding” agreement with Iran and, therefore, does not have to be submitted to Congress. This is interesting, because the actual nature of the agreement was unclear before that clarification. It is doubly interesting because it seems to contradict Iran’s understanding of what is being negotiated.

In a response to the GOP letter, Iranian Foreign Minister Javad Zarif stated:

In other words, Iran believed, as of several days ago, that it was negotiating a binding agreement.

This led some legal scholars, such as Harvard Law Professor and former Assistant Attorney General Jack Goldsmith, to speculate that that the Obama administration might be considering having the non-binding agreement endorsed by the United Nations Security Council in a Chapter VII resolution, which under the terms of the U.N. Charter are considered binding on all member states.

If this is indeed the plan—and a recent news story indicates that it is—it is a spectacularly naïve strategy.

The Security Council has passed multiple resolutions on Iran, including resolutions requiring them to suspend their nuclear and ballistic missile programs and to comply with International Atomic Energy Agency inspections. Sanctions were adopted to compel compliance with these demands.

Yet Iran has willfully and repeatedly violated these resolutions. The very fact that the current negotiations are being pursued underscores Iran’s non-compliance and complete disregard for the authority of the Security Council.

If the Security Council codifies the deal in a binding resolution, the Obama administration will certainly argue that the U.S. is legally required to abide by it and use its authority where available to waive or eliminate U.S. sanctions as negotiated. As noted by Goldsmith, “depending on the language of the resolution, the United States could have an international legal obligation not to impose sanctions on a compliant Iran.  Importantly, such an international legal obligation can persist far beyond President Obama’s term… a Security Council resolution could mean that the next President can reimpose congressional sanctions only by violating international law.”

But what if Iran is non-compliant? They are already under sanction and in violation of past Security Council resolutions yet are proceeding in their efforts to develop nuclear weapons and ballistic missiles. The U.S. and other countries are apparently unwilling to respond in a way that would dissuade them—on the contrary, apparently they are ready to concede Iran’s right to retain its current capabilities.

There is little reason to believe that Iran will be any more cooperative in the future. When they have gotten away with non-compliance so far, why would they expect significant consequences in the future?

Future flouting of Security Council demands by Iran is even more likely if the U.S. is foolish enough to remove sanctions before verifying compliance, which one would expect is the key demand of the Iranians in the negotiations. Once the sanctions are removed, odds are high that Russia and China will use their vetoes to block reinstatement of sanctions.

Certainly, a future U.S. administration could reimpose sanctions and use its veto to block any condemnation from the Security Council over its actions.

But the dynamic will be fundamentally switched. Currently, it is crystal clear that Iran is in violation of U.N. Security Council resolutions. The future debate will, instead, be a back and forth about whether Iran’s actions are sufficient to justify reapplication of sanctions. If the U.S. reimposes sanctions absent Security Council approval, other countries would be overjoyed to shift the focus and accuse the U.S. of non-compliance with international law.

The downsides of such a path are clear. Unfortunately, that this is exactly what the Obama administration reportedly hopes to do.