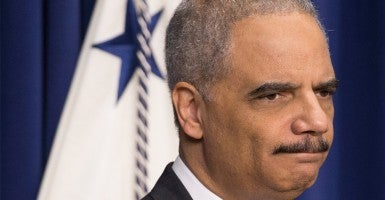 Now, the agency it touting a case it says it got right.

On Tuesday, the Justice Department announced it reached a $4.9 million settlement with CommerceWest Bank in Irvine, Calif., for knowingly enabling fraud.

The Justice Department accused the bank of permitting a third-party payment processor, V Internet, “to make millions of dollars of unauthorized withdrawals from consumer bank accounts on behalf of fraudulent merchants” from December 2011 through July 2013.

CommerceWest Bank denied that “any bank employee knowingly assisted with or willfully ignored sign of fraud being committed by V Internet,” although it did acknowledge in a statement that it recognizes “factors pointed to a problematic customer that deserved more scrutiny.”

A Justice Department spokeswoman told The Daily Signal today via email that the settlement was a direct result of Operation Choke Point.

“This case arose from our investigations into consumer fraud at banks, payment processors and fraudulent merchants, which have been dubbed Operation Choke Point,” said the spokeswoman.

Last April, Four Oaks Bank in North Carolina agreed to pay $1.2 million after facing accusations that it ignored warning signs of a scheme to defraud customers.

Under the program, banks are pressured to terminate relationships with customers deemed “high risk” for fraud.

Brian Wise, senior adviser at U.S. Consumer Coalition, a Washington, D.C.-based organization that has been leading the fight against Operation Choke Point, applauded the settlement with CommerceWest Bank, calling it “laudable.”

“[T]his is only the second settlement to come out of Operation Choke Point. There are potentially thousands of lawful and innocent businesses that have been negatively affected by Operation Choke Point. This begs the question: If the [Justice Department] already had the authority to do this under current law, why push a program that does more damage than good?”

While the agency maintains that it has “no interest in pursuing or discouraging lawful conduct,” critics say the program targets entire industries that the Obama administration doesn’t like.

Much of the criticism resulted from a 2011 list that was created by the Federal Deposit Insurance Corp. and was subsequently adopted by Operation Choke Point. The list labeled a range of both legal and illegal industries “high risk,” and the agency advised banks against doing business with those enterprises.

The Daily Signal, along with U.S. Consumer Coalition, has documented accounts of legal and legitimate firearms dealers, tobacco sellers and check cashers affected by the initiative.

“As the civil and criminal actions filed against CommerceWest Bank today demonstrate, we will hold financial institutions accountable when they choose unlawfully to look the other way while fraudsters use the bank’s accounts to steal millions of dollars from American consumers,” he said in a press release.

Wise, supporting the Justice Department’s latest investigation, said the agency’s “extra-legal tactics” are what pose a threat to business owners across America.

“Those opposed to Operation Choke Point have always contended that it is appropriate and necessary for the [Justice Department] to use their authority under [the Financial Institutions Reform, Recovery, and Enforcement Act] for cases like CommerceWest Bank’s,” he said.

It is the extra-legal tactics that they have pursued through Operation Choke Point that makes it a threat to lawful businesses and consumer choice.