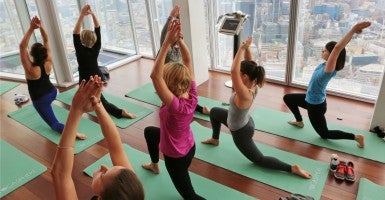 “How can you have people who know nothing about yoga regulating yoga schools?”

That was the complaint made to The New York Times by the aptly-named Annie Prasad Freedom, founder of a yoga studio in Denver.

In Colorado, yoga teacher instructors like Freedom face a host of regulations and must be certified by the state. In a January article, The Denver Post chronicled how expensive it is to follow the regulations:

Teacher-training programs that are required to be certified must pay fees to the state. The state charges $1,750 for an initial provisional certificate that is good for up to two years, then $1,500 for a renewable certificate good for three years. It also charges $175 for every ‘agent’ authorized to enter into a contract with a student, plus $3.75 per student per quarter. In addition, schools that have been certified must secure a minimum bond of $5,000, which is based on the amount of tuition collected.

And what’s the reason the government must charge so much and force yoga teachers to spend the time complying with the regulations? Here’s what the Times reported the state bureaucrats said:

[O]fficials of the state agency, the Division of Private Occupational Schools, say they are trying to protect aspiring teachers from fraudulent and unsafe programs. And they point to the case of Bikram Choudhury, a well-known yoga teacher accused of sexually assaulting students, as evidence that schools need government supervision.

First, there are already laws on the book banning anyone anywhere from sexually assaulting anyone.

But what about protecting students from terrible teachers?

No one wants to get ripped off and receive an awful service from some con artist or slacker. But there are many ways our society works to help that be avoided. Ever rented an apartment? Ate a meal at a restaurant? Chances are, if you wanted to, you were easily able to find reviews online prior to your decision about where to rent or dine—without the government mandating that say, every fifth patron of a restaurant write a Yelp review.

Freedom and other yoga instructors in Colorado may soon be done with the regulations, thanks to legislation that has passed the state Senate. (It’s now in state Assembly’s hands—although it would be hard for the Assembly lawmakers to out-antic the Senate: one state senator memorably did the crow yoga pose after the bill passed out of committee.)

But it shouldn’t take media attention and state lawmakers’ intervention to get rid of this kind of regulation. How many would-be yoga teachers decided to forgo doing so, after seeing the paperwork and costs involved? How many students paid more than they would have otherwise because of teachers passing on the costs created by the government supervision?

After all, just consider Michelle Voeller, who told the Times she stopped training yoga teachers after considering the costs of complying with the fees.

“It’s really sad,” Voeller said. “The bigger people will survive, and the smaller people trying to do really authentic work will suffer.”

In recent years, there’s been a surge of interest in small businesses, in moving away from the huge corporations and chains. Local and state governments should do what they can to help these one-person and smaller operations flourish, not cripple them with regulation after regulation.