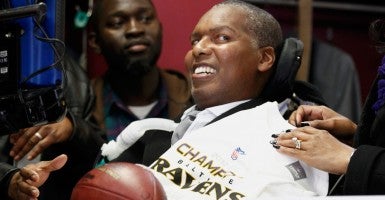 The right-to-die debate is ramping up across the nation as a number of states consider passing legislation that would allow terminally ill adults to take their own life.

Among them is Maryland, where lawmakers Tuesday heard emotional testimony from former Ravens linebacker O.J. Brigance, who said he’s enjoyed some of the most meaningful years of his life while terminally ill.

“I did not create my life, so I have no right to negate my life,” Brigance stated in his testimony before the Senate Judiciary Committee. “Since being diagnosed, I have done a greater good for society in eight years, than in my 37 years on earth.”

Once a 2000 Super Bowl champion, Brigance is now confined to a wheelchair.

The legislation, he wrote, would “devalue the lives and possible future contributions of Marylanders.”

“I did not create my life, so I have no right to negate my life,” says @OJBrigance

Brigance’s story juxtaposes that of Brittany Maynard, a 29-year-old woman with terminal brain cancer, who took her own life last November.

Maynard’s story has become somewhat symbolic in the right-to-die debate, as she opened up to the world by documenting her experience on YouTube.

Her story, which has since received over 11 million views on YouTube, mobilized grassroots activists to push forward legislation that would allow terminally ill patients like Maynard to take their own lives, according to advocacy group Compassion and Choices. Several states had previously considered such legislation in past years prior to Maynard’s death.

Maryland is one of around a dozen states considering right-to-die legislation this year. The current bill under debate would allow terminally ill patients with less than six months to live to take a pill that would end their lives.

Oregon, Vermont and Washington have legalized medically assisted suicide; courts in Montana and New Mexico have ruled in favor of it.

Peg Sandeen, executive director of the Death With Dignity National Center, testified on Friday in favor of Maryland’s right-to-die measure.

Death With Dignity National Center, headquartered in Portland, is one of the country’s most vocal advocates for the right-to-die movement, even naming its organization after Oregon’s law.

During her testimony, Sandeen appealed to the experience of Oregon, where adults were granted the right to die in 1997, as proof the law can be successfully implemented with no abuse.

“Now in its 18th year of successful implementation, the law sets forth precisely delineated conditions under which a patient may qualify for the medication,” Sandeen said. “The bill under consideration in Maryland draws upon this model and the comprehensive peer-reviewed medical literature examining Oregon’s experience with it.”

As is the case in Maryland’s Death With Dignity Act, leaders of the right to die movement often label legislation with some version of the phrase “death with dignity.”

But the terminology used to describe the right to die itself embodies the emotional divide in the debate.

What some call “death with dignity”—implying that allowing terminally ill patients a way to die is the compassionate thing to do—others call physician-assisted suicide.

“Physicians are always to care, never to kill,” says @RyanT_Anderson

First, it would endanger the weak and vulnerable. Second, it would corrupt the practice of medicine and the doctor–patient relationship. Third, it would compromise the family and intergenerational commitments. And fourth, it would betray human dignity and equality before the law. Doctors should help their patients to die a dignified death of natural causes, not assist in killing. Physicians are always to care, never to kill.

>>> Doctors Killed His Mom Because She Was Depressed. Now He Speaks Out Against Euthanasia.

But Sandeen, who in addition to overseeing Death With Dignity National Center, serves as a social worker for end-of-life care, sees it differently.

“I’m a social worker and when I work with people who are dying and who are interested in hastening their death, they’re not suicidal, they don’t want to die,” she said. “They are terminally ill and they have a condition that they will die from. It is so incredibly different from that irrational suicide that we think of when we traditionally think of suicide.”

Maryland is expected to hold a vote on the right-to-die legislation in the next two to three weeks, where if passed, will go to Republican Gov. Larry Hogan for approval.