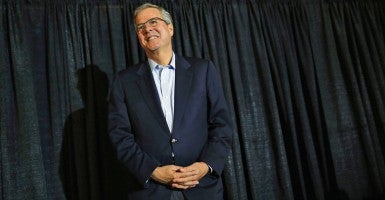 As president, George W. Bush made passage of No Child Left Behind one of his first priorities. Now, his brother Jeb Bush is speaking out in favor of reauthorizing the law as he plots his own run for the White House.

“The goal of conservatives should be to limit federal intervention in education by restoring state and local control of education,” says @lindseymburke

Writing for The Washington Post, the former Florida governor blamed President Obama for failing to improve the legislation. Instead, Bush said the current administration has issued “a patchwork of waivers and side deals, given out by fiat and without consistency.”

Claiming that “most states had no accountability system” prior to No Child Left Behind, Bush said the 2002 law created “a common yardstick.”

“Now, all states participate in the National Assessment of Educational Progress, a series of high-quality tests known as the Nation’s Report Card,” Bush wrote. “The results give us an apples-to-apples comparison among states. Annual testing and reporting also force states to confront their failures, especially the substandard education often offered to disadvantaged children.”

Bush acknowledged “NCLB is far from perfect,” but said its flaws “can be fixed in the reauthorization process.” He said changes should put “local districts in control of making vital decisions about standards, curriculum and academic content.”

Last month, as the House prepared to vote on the law’s reauthorization, GOP leaders quietly pulled the bill after a backlash from conservative lawmakers who said the proposal didn’t go far enough in scaling back the federal government’s role in education. Senators are reportedly close to reaching a bipartisan deal on their own version of the bill.

Lindsey Burke, the Will Skillman fellow in education policy at The Heritage Foundation, said reauthorizing No Child Left Behind without significant changes would be settling for the status quo.

“If we really want states to ‘take the lead on education,’ as Gov. Bush proposed in his op-ed,” Burke told The Daily Signal, “the best option on the table for doing so isn’t a reauthorization of a 620-page No Child Left Behind rewrite.” Burke has championed the Academic Partnerships Lead Us to Success (A-PLUS) legislation that would let states completely opt out of the programs and mandates authorized under education law. They could then direct funding to their education priorities as opposed to mandates from Washington.

“The goal of conservatives should be to limit federal intervention in education by restoring state and local control of education, not reauthorizing the nation’s largest K-12 education law in a way that codifies four decades of ineffective policy,” she said.

Burke added that Florida’s recent improvements to its own educational system are proof of what the states can accomplish when they are free from excessive intrusion from the federal government.

“Gov. Bush is correct in saying the federal government ‘should be subservient to the role of states,’” Burke said. “In order to get there, however, we need to stop the federal education spending spree, and begin eliminating the dozens upon dozens of grant programs that have accumulated at the U.S. Department of Education over the decades.”

As governor of Florida from 1999 to 2007, Bush spearheaded several education reforms in the Sunshine State, leading it to make some of the greatest education gains in the country, Burke said. “Gov. Bush is in a good position to recognize that the best path forward is to allow states to completely free themselves from large scale federal directives like No Child Left Behind,” she said.

In the op-ed, Bush also addressed the hot-button issue of Common Core education standards, which many conservatives oppose.

“We’ve seen more than 40 states voluntarily work together to create the Common Core standards for language arts and math,” Bush wrote. “I support such rigorous, state-driven academic standards. Some states would rather set their own standards, and that’s appropriate, provided they are high standards. But no matter what, no state should be forced to adopt standards mandated by the federal government.”

“Common Core grows federal intervention in education by putting federal fingerprints on the content taught in local schools across the country,” says @BrittanyLCorona

Brittany Corona, a research assistant in domestic policy studies at The Heritage Foundation, said the creators and early supporters of Common Core—Achieve Inc., National Governors Association, and Chief Council for State School Officers—had a different idea in mind. They called for federal incentives to be attached to the adoption of the standards in their 2008 report, “Benchmarking for Success.”

“From the beginning,” Corona said, “the effort has been incentivized by federal funding. Common Core can largely be described as an extension of the same failed logic of No Child Left Behind: all that’s missing in education is more centralization.”

Common Core supporters maintain there’s nothing nefarious about the standards. Michael Brickman, national policy director at the Thomas B. Fordham Institute, recently told The Daily Signal that Common Core is just a “set of goals and expectations” to standardize what students across the nation know when they graduate from high school.

“In many cases, it’s the exact things that conservatives have been calling for for a long time,” said Brickman, “mainly, a back-to-basics approach of focus on reading, writing and arithmetic.”

Brickman said everyone should know “what’s actually in the standards.”

“Let me be clear, I’ve seen some of the posts on Facebook about confusing math, I’ve seen the posts about what they don’t like about indoctrinating curriculum in schools. … They’re right. The parents who are out there concerned about those things are absolutely right. But they need to know that these things have nothing to do with Common Core.”

Brickman said that Common Core is often blamed for decisions made at the local level. He said that parents should remain engaged with their local school districts.

Heritage’s Corona, however, maintains that Common Core is the wrong approach to education reform.

“Common Core grows federal intervention in education by putting federal fingerprints on the content taught in local schools across the country,” she told The Daily Signal. “States should also ‘take the lead’ in their own standards writing and test creation, ensuring state autonomy over decisions about what is taught.”