Should Notre Dame Have to Provide Contraception? Circuit Court to Reconsider. 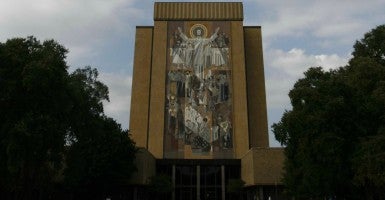 Earlier this week, the U.S. Supreme Court vacated a federal appellate court ruling against Notre Dame University in its challenge to the Obamacare mandate that forces employers to provide healthcare coverage of abortion-inducing drugs and devices.

The justices instructed the Chicago-based Seventh Circuit to reconsider the case in light of Burwell v. Hobby Lobby, in which the Supreme Court found that a closely-held, for-profit employer with a religious objection and no possibility of receiving an “accommodation” from the government could challenge the Obamacare mandate as a violation of the Religious Freedom Restoration Act (RFRA) of 1993. This law prohibits the government from substantially burdening the free exercise of religion unless it can show that the burden is the least restrictive means of furthering a compelling government interest.

To get the accommodation, employers must notify the Department of Health and Human Services that they have a religious objection to providing or paying for coverage of contraceptives.  This initiates the process of the government forcing insurers and third-party administrators to provide the mandated coverage to employees. Notre Dame challenged the accommodation, arguing that the causal link between giving notice to the government and the resulting provision of contraception substantially burdens its religious exercise.

In the Hobby Lobby decision, Justice Samuel Alito pointed to the existence of this accommodation as evidence that the Obamacare mandate failed the “least restrictive means” prong of the Religious Freedom Restoration Act. At the time, some saw this as a sign that the Supreme Court may rule in favor of the administration in a future accommodation case. In fact, in another non-profit case, the administration maintained that the accommodation was the “linchpin of the court’s very specific holding in Hobby Lobby.”

But now the Court instructed the Seventh Circuit to reconsider its ruling against Notre Dame in light of Hobby Lobby.  As Notre Dame has argued:

[W]hile Hobby Lobby squarely held that it is left to plaintiffs to determine whether an act “is connected” to illicit conduct “in a way that is sufficient to make it immoral,” … the Seventh Circuit confidently assured the University that the accommodation allowed it to “wash[ ] its hands of any involvement in contraceptive coverage…

Further, the lower court’s decision inappropriately focused on the actions Notre Dame must take (filling out a form to certify its religious objection to the mandate) instead of the consequences of not complying: $250 million per year in fines for failure to comply or $10 million per year if Notre Dame chose to drop its employee health plan altogether.

The Supreme Court’s action is good news for the challengers—and for religious liberty. You don’t have to agree with Notre Dame, Geneva College, Ave Maria University, the Little Sisters of the Poor or the many other challengers to recognize that the government should not be able to force Americans to choose between their religious beliefs and the law. But that’s exactly what this mandate does.

Now the ball is back in the Seventh Circuit’s court. Whatever happens, this likely won’t be the last we hear from Notre Dame, or the Supreme Court, on the accommodation.