Memo to Supreme Court: Nothing in the Constitution Requires States to Redefine Marriage 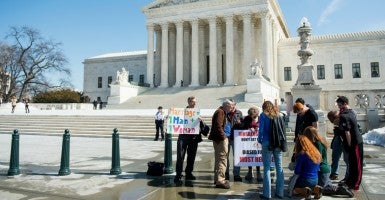 Members of the Congressional Prayer Conference pray with a group of tourists as they hold a vigil against same-sex marriage in front of the Supreme Court Monday. (Photo: Bill Clark/CQ Roll Call/Newscom)

Next month, the U.S. Supreme Court will hear oral arguments about the constitutional status of state laws defining marriage as the exclusive union of husband and wife.

Those suing to overturn male-female marriage laws thus have to prove that the man–woman marriage policy that has existed in the United States throughout our entire history is prohibited by the U.S. Constitution.

The only way someone could succeed in such an argument is to adopt a view of marriage that sees it as an essentially genderless institution based only on the emotional needs of adults and then declare that the U.S. Constitution requires that the states (re)define marriage in such a way. Equal protection alone is not enough. To strike down marriage laws, the Court would need to say that the vision of marriage that our law has long applied equally is just wrong: that the Constitution requires a different vision entirely.

The U.S. Constitution, however, is silent on what marriage is and what policy goals the states should design it to serve, and there are good policy arguments on both sides. Judges should not insert their own policy preferences about marriage and declare them to be required by the U.S. Constitution.

On Tuesday, The Heritage Foundation published our new Legal Memorandum: “Memo to Supreme Court: State Marriage Laws Are Constitutional.” In it we explain that there simply is nothing in the U.S. Constitution that requires all 50 states to redefine marriage.

Those suing to overturn male-female marriage laws thus have to prove that the man–woman marriage policy that has existed in the United States throughout our entire history is prohibited by the U.S. Constitution.

We explain why advocates for the judicial redefinition of marriage cannot reasonably appeal to the authority of Windsor, to the text or original meaning of the Fourteenth Amendment, to the fundamental rights protected by the Due Process Clause, or to Loving v. Virginia. So, too, one cannot properly appeal to the Equal Protection Clause or to animus or Lawrence. Nor can one say that gays and lesbians are politically powerless, so one cannot claim they are a suspect class. Nor can one say that male–female marriage laws lack a rational basis or that they do not serve a compelling state interest in a narrowly tailored way.

Part of the design of federalism is that experimentation can take place in the states: As the Sixth Circuit noted when it upheld several states’ marriage laws, “federalism…permits laboratories of experimentation—accent on the plural—allowing one State to innovate one way, another State another, and a third State to assess the trial and error over time.” Judges should not cut this process short.

At the end of the day, this is a debate about whether citizens or judges will decide an important and sensitive policy issue—in this case, the very nature of civil marriage. Read more about it in our new legal memo.