What Difference Does It Make? Americans Are Paying Attention to Latest Clinton Controversy 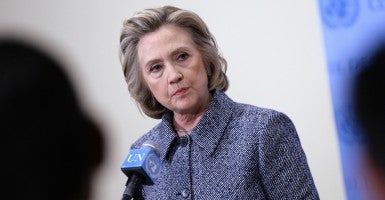 Former Secretary of State Hillary Clinton set social media on fire Tuesday afternoon as she addressed the press for the first time since it was revealed she used her personal email address to conduct official government business.

“I thought using one device would be simpler,” @HillaryClinton said of the email controversy.

The newest scandal involving the presidential hopeful is garnering the attention of not just those deemed the “political elite,” but Americans living and working far from Washington, D.C., as well.

According to analysis from Echelon Insights, a research and digital intelligence firm, Clinton’s controversy sparked interest on social media most among those considered “Beltway elites.” However, the issue was not lost among the general population.

In analyzing the top political topics in the week since news of Clinton’s use of a personal email address broke, most Americans using Twitter took interest primarily in Israel and Israeli Prime Minister Benjamin Netanyahu. Netanyahu addressed members of Congress in Washington, D.C., last week. The Clinton controversy followed closely behind in interest.

By contrast, those among the “Beltway elite” focused on Clinton first, followed by Israel.

According to Echelon, though “Beltway elites” and the general population are interested in Clinton’s scandal, there was a notable difference in when the issue was discussed between the two groups. Conversation among “elites” peaked on the day news broke that Clinton used a personal email address to conduct official business. Conversation among everyday Americans followed two days later.

During Clinton’s press conference Tuesday, Twitter users found their feed dominated by mentions of the former secretary of state, according to Echelon Insights. The 2016 hopeful maintained an 80 percent share of political conversations in the hour following her address. Clinton is billed as the leading Democratic presidential contender in what is currently a narrow field. However, there has been speculation as to how the recent controversy will play into her 2016 bid.

Pollster John Zogby, who just completed a national survey of 1,349 Democratic voters, found that Clinton has a sizeable lead of 46 percent to 13 percent over Vice President Joe Biden, another presidential prospect. Zogby noted, however, that Clinton’s lead shrinks to 10 percentage points when all challengers are added together. Another 20 percent remain undecided.

“Bill has always had a better process for shaking these things off. She’s not as smooth,” says @TheJohnZogby

“How do you explain undecideds in a Democratic primary for a woman who has 100 percent name recognition?” Zogby asked in an interview with The Daily Signal. “Hillary Clinton is not home free.”

Zogby said the biggest challenge facing Clinton is her ability to focus on policy issues at a time when pundits and the press want to talk about the latest scandal or controversy.

“When you get into Iowa, is she going to be able to talk about issues?” Zogby said. “The Clintons know how to take the heat. Bill has always had a better process for shaking these things off. She’s not as smooth.”

Similarly, Republican strategist Rick Wilson told The Daily Signal that Clinton now faces a skeptical media and must be prepared to answer difficult questions when she runs for president.

Wilson worked for former New York City Mayor Rudy Giuliani when he mounted a challenge to Clinton in the race for the U.S. Senate in New York. When asked if Clinton could regain the public’s trust following this email scandal, Wilson said he didn’t believe so.

On the other end of the political spectrum, Roland Martin suggested the controversy would fade by the time voters had to make a choice at the ballot box.

“I don’t think for a second this email issue will matter to voters. This has nothing to do with partisan politics,” Martin, host of NewsOne Now, told The Daily Signal. “The overriding issue, if Clinton does run, will be the economy, leadership on foreign affairs, and getting Congress and the White House to work together.”

“I am not dismissing the issue,” he continued. “I just don’t see it being that major to voters.”

Speaking from outside the U.N. Security Council chambers in New York City today, the former secretary of state attempted to downplay the controversy surrounding her use of a private email address. Clinton said her motives behind doing so were a matter of convenience.

“I thought using one device would be simpler,” Clinton said. “Obviously, it hasn’t worked out that way.”

“I don’t think for a second this email issue will matter to voters,” says @rolandsmartin

Last week, The New York Times reported that Clinton used a personal email address to conduct official business during her tenure as the top U.S. diplomat. Then, it was revealed that a private domain, clintonemail.com, and server were registered to her home in Chappaqua, N.Y., with the names of the accounts registered to Clinton’s aides.

The former secretary of state conducted business using the email address hdr22@clintonemail.com instead of an official government-issued account.

During her news conference today, Clinton said that she would make 30,000 of her work-related emails public. However, she conceded that thousands were deleted, as she felt they were of a personal nature.

“They were about personal and private matters that I believe were in the scope of my personal privacy and particularly that of other people,” Clinton said. “They had nothing to do with work. I didn’t see a need to keep them.”