Thousands of Illegal Immigrants Likely to Get Social Security, Thanks to Obama’s Immigration Executive Actions 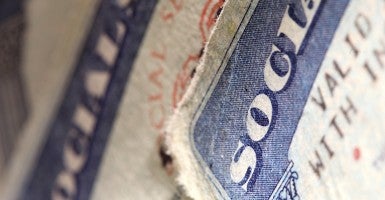 President Obama’s executive actions on immigration will likely lead to a hike in the number of people eligible to collect Social Security.

“Starting in 2017, the Social Security Administration expects that thousands of undocumented immigrants will begin collecting from the Old-Age, Survivor’s, and Disability Insurance (OASDI) program as a direct result of the president’s actions,” reported National Review

Stephen Goss, the chief actuary at SSA, acknowledged in a letter to Sen. Ron Johnson, R-Wis., that the “increase in OASDI covered workers starting in 2015 due to the executive actions will also result in additional individuals gaining insured status for benefits from Social Security.”

For 2024, we estimate that the additional number of individuals receiving a benefit from Social Security as a result of the 2014 executive actions will be just 16,000, increasing the total number of beneficiaries by 0.02 percent.  By 2050, we project the increase in beneficiaries due to the executive actions will rise to about 0.76 percent, and will decline thereafter as the affected populations age.

In a recent issue brief, Rachel Greszler, the senior policy analyst in economics and entitlements at The Heritage Foundation, wrote that legalizing illegal immigrants would increase Social Security’s liabilities

As the Social Security Administration prepares to welcome thousands of undocumented immigrants as beneficiaries, a report has come to light about inefficiency at the administration.

According to a report by the Office of the Inspector General, there are 6.5 million people who have active Social Security numbers who have reached 112 in age or more, and thus are in all likelihood deceased.

The Gerontology Research Group estimates that as of October 2013, there were only 35 known individuals in the entire world who had reached the age of 112.

In a joint statement, Sens. Ron Johnson, R-Wis., and Tom Carper, D-Del., said that the errors of the Social Security Administration were “preventable.”

“It is incredible that the Social Security Administration in 2015 does not have the technical sophistication to ensure that people they know to be deceased are actually noted as dead,” said Johnson.

“This problem has serious consequences,” he added. “Tens of thousands of these numbers are currently being used to report wages to the Social Security Administration and to the IRS. People are fraudulently, but successfully, applying for jobs and benefits with these numbers. Making sure Social Security cleans up its death master file to prevent future errors and fraud is a good government reform we can all agree on.”

“This report by the Social Security Administration’s Inspector General details a major problem with how we report and keep track of deceased individuals,” Carper said. “Not only do these types of avoidable errors waste millions of taxpayers’ dollars annually and expose our citizens to identify theft, but they also undermine confidence in our government.”

Carper called the report “unacceptable,” noting that some of the recorded users had birthdays predating the Civil War.

“Preventing agency errors by keeping track of who has died is a relatively simple problem that the government should pursue as a high priority,” said Carper.

According to the statement, the senators will be contacting the head of the Social Security Administration for “specific answers” as to how “to put an end to this unacceptable situation.”