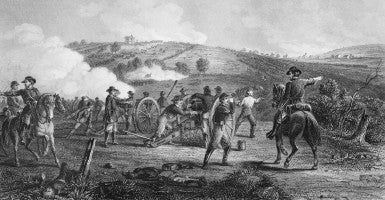 A scene from the Civil War. (Image: iStockPhoto)

As noted in our Heritage Foundation “First Principles” essay, today a fresh reading of Brownson’s masterwork can give Americans a deeper understanding of their precious civic birthright, the unique federal order that guarantees their personal and political freedom.

Prophetically, Brownson warned that the greatest future threats to the Republic were internal. He called upon his fellow Americans to oppose the relentless centralization of power in Washington; a transformation fueled by a new secular ideology—“humanitarian democracy”—that would war against all prescriptions and traditions, as well as state and local powers, in the name of equality, and seek to crush all genuine diversity, individual distinctions, and subordinate even personal conscience itself on the altar of a fully secularized, and thus absolute, state.

The Founders’ genius was in devising a constitutional order that recognized the truth of man’s individuality, his flourishing in freedom, and the sacredness of his person, particularly in his relationship to God: “The American constitution is not founded on political atheism, but recognizes the rights of man, and therefore, the rights of God.”

Today, when Americans of all religious faiths have just cause to fear government assaults on religious liberty, the wisdom of Brownson—a devout Catholic—is a bounteous benefit for all. Protect the sacred, he warned, from the profane and thus preserve the moral order: “If they [government officials] could subject religion to the secular order, or completely secularize the church, they would reduce themselves to the secular order alone, and deprive themselves of all aid from religion. To secularize religion is to nullify it.”

While a journalist, urgently writing on contemporary topics in his Quarterly Review, many of his opinions, right or wrong, were exclusively relevant to his own time. However, Brownson also developed a sophisticated and consistent philosophical conservatism that imparted a timeless quality to his observations. Those hard hitting commentaries are strikingly relevant to contemporary America. For example:

The Civil War was a terrible trial for millions—Brownson himself lost two sons—but the calm courage of the American people prepared them for world leadership:

“With larger armies on foot than Napoleon ever commanded, with their line of battle stretching from ocean to ocean, across the whole breadth of the continent, they never, during four long years of alternate victories and defeats—and both unprecedently bloody—or a moment lost their equanimity, or appeared less calm, collected and tranquil, than in ordinary times of peace…Their success proves to all that what, prior to the war, was treated as American arrogance or self-conceit, was only the outspoken confidence in their destiny as a providential people, conscious that to them is reserved the hegemony of the world.”

That “hegemony” was moral, not militaristic. Rather it was the success, for the entire world to witness, of America’s providential mission to secure the greatest degree of human liberty under law; a unique experiment in self-government realized through the ingenious Federal Constitution, the priceless gift of America’s Founders. This was a recurrent theme in Brownson’s writings. It was a theme that, over a century later, President Ronald Reagan also expressed in his vision of America as a “Shining City on a Hill.” Brownson’s name recognition may be low, but his ideas and insights have endured.