Independent Sen. Bernie Sanders Makes an Outside Pitch for President 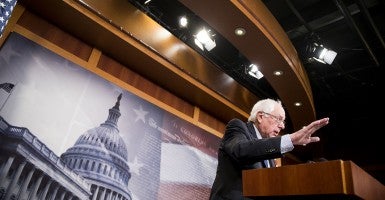 Sen. Bernie Sanders laid out his outside pitch for president in a speech today at the National Press Club in Washington D.C.

Sanders, an independent from Vermont, said that he is “thinking” about running for president, presenting himself as a possible challenger to presumed Democratic frontrunner Hillary Clinton.

“The reason I have been thinking about running for president is not because I wake up in the morning with a burning desire [to run],” said Sanders, who caucuses with Democrats.

In his speech, Sanders railed against what he sees as unfair economic advantages for Wall Street. He positioned himself as someone who would help ordinary Americans.

“It’s time for these corporations to pay their fair share,” Sanders said.

In a nod to the recent anniversary of the march at Selma, Sanders also pushed for more equality in society.

“It is imperative that we learn from the civil rights [struggle]” Sanders said.

Sanders spoke of the challenges facing him should he decide to run in 2016 — the largest of which, he said, would be his small budget.

“[It’s challenging] when you’re taking on the Koch brothers,” Sanders said. “I’m not a billionaire.”

Still, despite the lack of a party behind him, Sanders was adamant that he could run a credible campaign.

“There is a lot of support for this,” Sanders said.