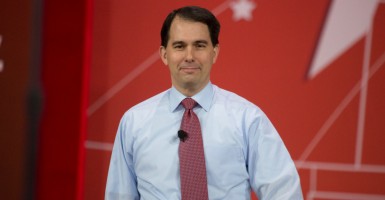 The victory is a historic moment for the growing right-to-work movement. Workers in half the country are now free to stop paying dues to a union they feel is not representing their interests. Despite vehement pushback from union officials, Walker stood with the majority of voters nationwide and in Wisconsin who support workplace freedom. Without right-to-work, workers have little protection from their own union, which can seize part of their paycheck without their consent. Right-to-work lets workers decide whether or not their union has earned their support.

Even some union officials recognize this makes sense. Gary Casteel, now the secretary-treasurer for the United Auto Workers, told the press last year:

The new law will also mean more jobs for Wisconsinites. Unions organize aggressively in non-right-to-work states. Convincing 51 percent of employees to unionize means all of them must pay dues in perpetuity (unions do not generally have to run for re-election). Right-to-work reduces the financial incentive for unions to target companies with satisfied workers, which makes businesses more likely to locate there.

Wisconsin joins its Midwestern neighbors Indiana and Michigan, which both passed right-to-work in 2012. Many counties across Kentucky have enacted similar provisions at the local level. Unions protested vehemently against right-to-work in all  these jurisdictions. One high-profile union supporter in Michigan even vowed “there will be blood.” It never happened. Instead many workers opted out, while many more kept paying dues for union representation they liked. And almost every politician who supported the policy got re-elected.

In face of protests from the left Walker did the right thing. Unions do not like voluntary dues, but workers and voters do.