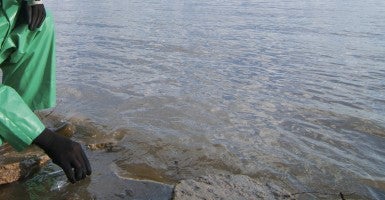 Here’s a quick update on the latest developments in environmental regulation: The Environmental Protection Agency (EPA) is preparing what likely will be the most costly regulation in history—stringent ozone restrictions that manufacturers estimate will cost the economy $140 billion and threaten one million jobs.

The EPA and Army Corps of Engineers are attempting to vastly expand their authority over virtually every land-use decision under the guise of protecting wetlands. And then there’s the Obama administration’s attempt to bypass Congress with its “climate action plan” to drastically raise the cost of the fossil fuels that power the nation.

Although the details of these various regulatory schemes differ, collectively they represent deeply disturbing aspects of current environmental policy: agencies routinely exceeding their statutory powers, the absence of scientific and economic analyses to inform decision-making, the penchant of Congress to ignore regulatory costs and delegate their powers, and a persistent imbalance between regulatory costs and benefits.

These problems represent dysfunction of a high order, the result of years of regulatory abuse. Nor are the problems solely economic. Overly politicized policies shift attention and resources from real environmental threats to ideological causes—and the environment suffers.

For years, some conservatives (and only some) have argued against ineffective and inefficient environmental regulation. But just saying “no” isn’t enough. Americans care about the environment and thus advocates of sensible natural resource stewardship must initiate commonsense reforms and offer alternatives to the status quo.

Toward those ends, the Heritage Foundation this week released its recommendations for improving environmental policy. The new Environmental Policy Guide features 167 recommendations for reform that arose from consultations with dozens of experts from a variety of fields. In nine chapters organized by environmental issue, the guide offers reforms that can be achieved through legislation, authorizations and oversight.

For example, the Endangered Species Act and the Clean Water Act require amendment in order for property owners to receive compensation when government restrictions result in the loss of property value. Otherwise, there is no check on the agencies’ “taking” of private property, and individuals are forced to pay the costs of policies that supposedly benefit all.

Congress also must conduct oversight hearings on the near-term impacts of the administration’s sweeping climate action plan on electric power reliability. In addition, there should be no funding to implement or enforce any regulation that is based on information or data that does not meet federal quality standards. Junk science makes for junk policy.

Regulatory excess increasingly inhibits economic growth and erodes individual liberty. Reforms are urgently needed to impose accountability on agencies and Congress. The Environmental Policy Guide provides concrete and sensible actions to do so.