How the New Lee-Rubio Tax Plan Would Boost the Economy 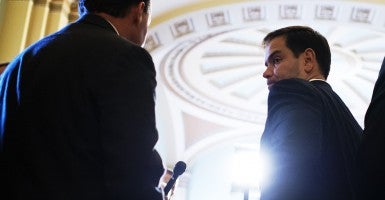 The U.S. has the highest corporate tax rate in the developed world, is the only major country to tax its businesses on income earned outside the country and delays the ability of businesses to deduct capital expenses for as long as 39 years. The monstrous complexity of the U.S. tax system has a disproportionately adverse impact on small businesses. It is a major reason why U.S. economic performance is anemic.

The Lee-Rubio plan, announced today, would fix these problems and result in a rapidly growing economy. Based on a forthcoming Tax Foundation study of the plan and previous analyses of similar plans in the past, the plan from Sens. Mike Lee, R-Utah, and Marco Rubio, R-Fla., has the realistic potential to increase the size of the economy by 15 percent over what it would be if we do nothing. Although tax lawyers would probably see their incomes decline, most Americans would see substantially higher real incomes.

The plan does this by reducing business tax rates to 25 percent, allowing business to deduct capital expenses when incurred, moving to a tax system that does not punish U.S. businesses for operating and selling abroad and eliminating the double taxation of corporate income.

The individual side of the plan moderately reduces tax rates for some, but not all, taxpayers. It eliminates most itemized deductions. It would provide a large child credit that would cut taxes for many families with young children. But child credits do not improve the incentive to work, save, invest or take entrepreneurial risks. The revenue used to fund the additional child credit would be better used to lower tax rates. This would further improve economic growth and increase incomes for all families.

The business reforms in the Lee-Rubio plan are extremely good and would make virtually all Americans better off but the individual reforms could be improved.

A full analysis of the plan is forthcoming.