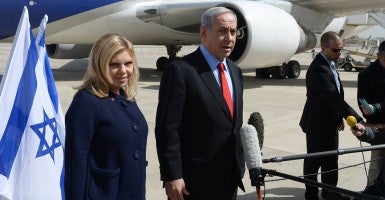 Jimmy Carter had one of the worst foreign and defense policy records of any modern president. But, at least he cut one good deal. The speech by Israeli Prime Minister Benjamin (Bibi) Netanyahu before a joint session of Congress makes clear President Obama can’t even match Carter’s level of competency.

The high point of Carter’s presidency took place a little over a year after he took office, brokering the Camp David Accord, a peace agreement between Israel and Egypt. The deal endures to this day. It was realistic. Both sides wanted peace. Peace was what they got.

Netanyahu made the case before Congress that the White House’s efforts to negotiate a deal with Iran have about as much in common with the Camp David Accords as an SNL skit has with a State of the Union Address. The administration’s proposal is anything but a realistic plan for peace.

A real peace plan would demonstrate that all sides were committed to not adding more nuclear weapons powers to the Middle East. The deal as it stands does the opposite—it preserves the nuclear option for Iran—and as result will prompt other regional powers to hedge their bets and prepare to go nuclear as well rather than live in Tehran’s nuclear shadow.

The proposed multi-year moratorium doesn’t end concerns that Iran will build a bomb and put nuclear warheads on long-range missiles. Rather, under the agreement, Tehran can walk up to the edge of becoming a declared armed-nuclear state with a robust missile force and sit there. That hardly sets the condition for sure peace in our time.

Meanwhile, even the shaky stalemate proposed by the agreement rests on the assumption that Tehran won’t follow North Korea’s path to breakout status by cheating on the agreement and then abrogating the deal when it no longer suits the regime.

At the same time the price for Obama’s peace comes pretty high. Tehran demands significant and immediate sanctions relief. That means more money for a corrupt regime with one of the world’s worst human records to perpetuate strangled hold over the people of Iran.

Obama’s deal also means more money for Tehran to prop-up the likes of Hezbollah, Assad, Hamas, the Houthi rebels in Yemen and murderous unaccountable Shia militias in Iraq (which are as big a threat to the future of the country as ISIS). As one of the world’s premier state-sponsors of terrorism, enabling and emboldening Iran’s efforts to reshape the region by force of arms and slaughtering innocents doesn’t make the prospects for peace in the region any brighter.

All the partisan controversy and vitriol over Netanyahu’s speech cannot obscure that the White House has no good answers to the legitimate concerns he raised.

In the end, it was appropriate for the issue to be brought before Congress. There are only two powers capable of preventing Obama sealing a deal with Iran and cementing his legacy as a far-worse foreign policy president than Jimmy Carter. Tehran, of course, could string-out negotiations or sink the deal with even more outrageous demands to be given more for giving up very little.

The only other voice capable of interceding with the president is Congress. Having all the facts of what is at stake before them before they decide what to do makes sense. That fact made this speech worth hearing.