Can Obama Raise Your Taxes Without Congressional Approval? 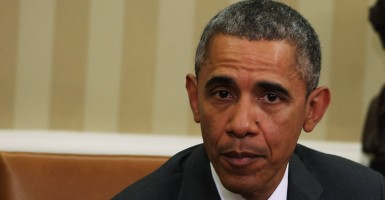 The U.S. Constitution requires that tax bills originate in the House of Representatives. So could President Obama really impose a tax hike on Americans through executive action?

White House Press Secretary Josh Earnest said Monday that Obama is “very interested” in raising taxes without congressional approval, according to a report by Townhall.

Recently, Sen. Bernie Sanders, I-Vt., sent a letter to the president, advocating that the administration “act on its own” to close tax “loopholes.”

“Since the Republican-led Congress has refused to raise revenue by asking the most profitable corporations to pay their fair share, I would hope that the president could take executive action to remedy some of the most egregious loopholes,” Sanders said in a statement regarding the letter.

Asked about Sanders’ suggestion, Earnest said the president is “very interested in this avenue generally.”

“The president certainly has not indicated any reticence in using his executive authority to try and advance an agenda that benefits middle class Americans,” Earnest told reporters.

Earnest cautioned that there is no “imminent” plan to raise taxes, but that the president is considering an “array of executive authorities that are available to him to try to make progress on his goals.”

Hans von Spakovsky, manager of the Election Law Reform Initiative and senior legal fellow at The Heritage Foundation, said that the president doesn’t have the constitutional authority to raise taxes unilaterally.

“This is another sign of how arrogant (and dangerous) this president is,” said von Spakovsky. “He believes he can rule by executive fiat and that the restrictions and limitations in the Constitution on the executive can just be ignored or shrugged off. The president has no authority to raise taxes whatsoever. Only the House of Representatives can originate bills for raising taxes, and this would be just the latest unilateral, abusive and unconstitutional action of the president.”

Curtis Dubay, a research fellow in taxes and economic policy at The Heritage Foundation, added that even through legal means, now is not the time for a tax hike.

“Tax revenue is near its historical average as a percentage of the economy,” said Dubay. “Washington has no business raising taxes today, whether legitimately through a bill passed by Congress and signed by the president, or unilaterally and illegitimately by a president far overstepping his legal authority.”

A White House spokeswoman told The Wall Street Journal they had “received the letter and would respond directly to Mr. Sanders.”