What This Homeschool Mom Thinks About How the Government Regulates Homeschooling 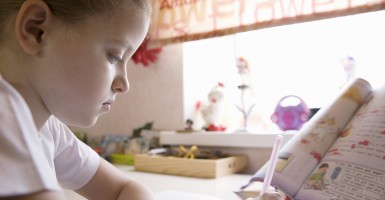 If millions of Americans are doing it, the conventional wisdom among government bureaucrats is that somebody ought to regulate it.

Look no further than the growing movement known as homeschooling. It’s estimated that upwards of 3 million school age children in America are now foregoing the traditional schoolhouse, public or private, and getting their education at home.

That has some people concerned – primarily those in the public education establishment who have done such a stellar job educating the children under their care they believe they have time to monitor what’s going on elsewhere.  (For the record, according to the 2013 findings of the Program for International Student Assessment, students in 29 countries statistically outperformed U.S. students in math, 19 did so in reading, and 22 did so in science.)

>>>To see the homeschool laws in your state, see this map from the Home School Legal Defense Association.

But according to a January New York Times article, some critics of homeschooling are coming from within the community itself. That piqued my interest.

Take the young woman featured in the story who bemoans the fact that her mother “used science textbooks that taught the theory of intelligent design and shied away from rigorous math during her high school years.” She says the result was that she had to take some remedial math classes in college.

Hmmm. Considering she is now a doctoral candidate in history at the University of Michigan, maybe the reality is that math just wasn’t her strong suit and her talents lay in other subjects. And, I’d venture to guess that the percentage of public school students who graduate every year that have to take remedial courses in math (and a number of other subjects) when they enter college far outweigh the number of homeschoolers who do.

What about the homeschooling mom also featured in the Times article, who let her son play a video game, Minecraft, to burn off energy after only 10 minutes of schoolwork?  Surely we should be monitoring that kind of thing, right?

Homeschooling challenges the public education bureaucracy in America that says children are better off with professional educators.

Well, not so fast. The reporter only references that particular scene which takes place in the afternoon with no mention as to what little 10-year-old Elijah may have already accomplished in terms of schoolwork that day. Can he read and write for his age level? The article doesn’t say but my guess is he can do that and more–otherwise such shortcomings would have been reported in the story.

To get more insight into all of this, I decided to talk with someone who is a real expert in education – my sister who lives in North Carolina and, in addition to having more degrees than I do and being a college professor, homeschools my three oldest nephews. I asked my sister, Amanda Aucoin, what she thought about homeschool regulations, testing, and the desire by some to encourage more of both.  Here is her take:

Q:  How much regulation of homeschooling is needed?

A:  I think North Carolina is a great example of striking a balance. Parents are asked to register with the Department of Non-Public Education, which also has oversight of private schools in the state. You let them know when you open, add a student or close your homeschool.  You also are asked to keep ‘attendance’ records, meaning you check a box on a sheet for each day ‘educational activities or instruction was conducted.’ It’s flexible, but you do agree to do 36 weeks of educational days per year. Q:  What about annual testing?

A:  In North Carolina, you agree to give a standardized test to each student age seven and over in your homeschool. Parents choose the test, and I don’t know of any restrictions there. You also agree to keep the scores of the test on file for voluntary inspection. So, there are regulations, but it’s all voluntary.  And I think that’s good because it shows the state is not completely unconcerned with the welfare of homeschool students, but also not micromanaging at all.

Q:  But you also say you don’t find the tests particularly helpful. Why?

A:  The point of testing in all schools initially was to let parents know how their children are doing academically. Well, if you homeschool, you pretty much know that already. Now the motivation for testing seems to have changed, it’s a test of the educators and the school more than the students, and it’s not surprising some would want to apply this to home schools as well.

Q:  What do you think are the primary motivations of those who want more regulations?

A:  Homeschooling challenges the public education bureaucracy in America that says children are better off with professional educators. The more it grows the more they believe it threatens public schools, education programs at colleges (which grant teaching certificates), thousands of bureaucrats, millions of paid teachers, and billions in state and federal dollars – especially when it is demonstrated how well homeschool students do academically, on a fraction of the yearly budget per student.  THAT, in my opinion, is the real reason behind the ‘concerns’ of most non-homeschoolers on this issue. Public education is an industry in our country.

Q:  Now that you’ve told us what you really think…any other points you’d like to make about homeschooling?

A:  Even though one may think public education is okay, that doesn’t mean it’s the standard by which every educational practice should be normed or tested. Homeschoolers may be seen as having knee-jerk reactions to the idea of state regulation but we know regulators are usually not satisfied with minimalist oversight, and opening the door to more government intervention will not lead where most of us want to go.  Homeschoolers do not wish to replicate the public schools just in a different setting and with prayer. For many, it’s a whole different philosophy of education.