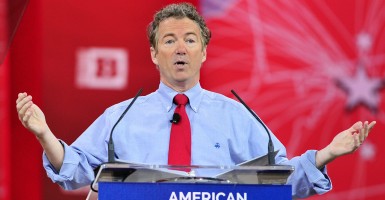 In results announced at about 5:15 p.m., Paul rolled up 26 percent of the vote to top the field of 17 possible Republican candidates for president next year. CPAC officials said he was followed at 21 percent by Wisconsin Gov. Scott Walker, who has been surging in scientific preference polls of Republican voters.

>>> Rand Paul at CPAC: ‘Defend the Whole Bill of Rights’

“I am humbled by the enthusiastic support and encouragement I received this week at the Conservative Political Action Conference,” Paul said in a statement. His political action committee later released this video featuring excerpts of his speech Friday and chants of “President Paul.”

Jeb Bush, the former Florida governor considered a Republican powerhouse, came in fifth with 8 percent followed by a veteran of the 2012 presidential race—Rick Santorum, the former senator from Pennsylvania.

Paul, in his first term as the junior senator from Kentucky, dipped from his performance last year, when he received 31 percent of the vote at CPAC. He garnered 25 percent the year before.

I plan on doing my part to continue making the GOP a bigger, bolder party. Thanks, #cpac2015!

The annual poll co-sponsored by The Washington Times asked CPAC attendees—many of them under 30—who they would vote for as the Republican nominee for president in 2016. A total of 3,007 votes were cast over the four-day conference outside Washington, D.C.

Thanks to all the support #CPAC15! Talked about our week, and issues tackled by @OurRevival on @FoxNewsSunday. http://t.co/7Ya3Y1xtUc

Rubio’s seventh-place finish put him in the same slot as last year when, hurt by his efforts to move illegal immigrants toward legal status, the first-term Florida senator drew 6 percent. In 2013, he had finished second behind Paul with 23 percent.

Last year Cruz, also a first-term senator, finished second with 11 percent, edging Carson at 9 percent and followed by Christie (8 percent), Walker and Santorum (both with 7 percent).

In his statement, Paul also said:

Our party is filled with constitutional conservatives who have chosen to stand with me for a third consecutive straw poll victory. Since President Ronald Reagan, the Conservative Political Action Conference has been the gold standard on where conservatives stand.

The constitutional conservatives of our party have spoken in a loud and clear voice today. I plan on doing my part and I hope you will join me as I continue to make the GOP a bigger, better and bolder party.

CPAC, the largest annual national gathering of conservative activists, ran Wednesday through this evening at the Gaylord National Resort and Convention Center in National Harbor, Md., just outside Washington, D.C.

This post was modified as final results were released.