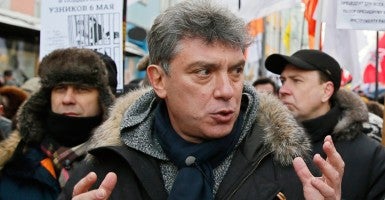 The barbaric assassination today of Boris Nemtsov, a brave adversary of the Putin administration, is a stark reminder of the grave dangers faced by political dissidents in Russia.

Nemtsov’s brutal murder took place in the shadow of the Kremlin against a backdrop of mounting repression in Moscow, implemented by an increasingly authoritarian regime that suppresses political opposition and crushes individual liberty.

After the fall of the Soviet Empire, Nemtsov emerged as a leading supporter of free-market policies amidst the ash heap of communism.

As governor of the Russian city of Nizhny Novgorod in the early to mid-1990s, Nemtsov advanced a pro-market agenda that challenged decades of central planning that had impoverished ordinary Russians.

Nemtsov swiftly established a reputation as an economic reformer, and hosted the Iron Lady, Margaret Thatcher, when she visited the city in 1993 on her first visit to post-Soviet Russia. His success as governor propelled him to the position of deputy prime minister under Boris Yeltsin from 1997 to 1998.

In more recent years, Nemtsov was a thorn in the side of Russian President Vladimir Putin, frequently condemning Putin’s dictatorial style, and the widespread corruption endemic in the Russian government.

Nemtsov was on several occasions arrested and detained following anti-Putin protests. He was a leading opponent of Moscow’s occupation of Crimea and invasion of Ukraine, a prominent and often lonely voice speaking out in the face of tremendous intimidation.

Nemtsov’s vision of a Russia that embraces individual liberty and economic freedom was the antithesis of Vladimir Putin’s tyrannical approach, which is making his people poorer, less free and more isolated in the world.

The death of Nemtsov must strengthen the resolve of the free world to stand up to Putin’s aggression, which threatens the people of Ukraine as well as NATO members in close proximity to Russia, including the Baltic States and Poland.

Nemtsov stood for liberty, democracy and respect for national sovereignty. In contrast, Putin has become a symbol of menace, fear and brutality in Europe, a throwback to an earlier era of totalitarianism.