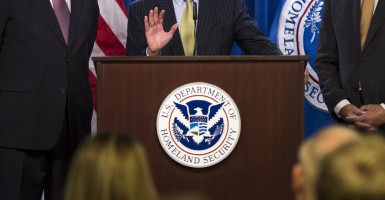 After Congress tonight approved a one-week funding bill for the Department of Homeland Security just hours before a midnight deadline, Republican lawmakers still struggled over how to fund the agency beyond seven days while fulfilling their stated goal of stopping President Obama’s immigration actions.

“I am not sure how it is all going to end,” Sen. Mike Lee, R-Utah, told The Daily Signal in an interview before the Senate and House passed the one-week funding legislation. “One way or another we need to find a way to keep [Homeland Security] funded.”

Earlier tonight, the House failed to pass a bill that would have extended Homeland Security funding for three weeks.

Senate Majority Leader Mitch McConnell then abruptly put forth a one-week funding plan, which the House later approved by a vote of 357-60. When the votes were tallied, 55 Republicans opposed the one-week plan.

House Speaker John Boehner and his leadership team hope the extra time will allow restive conservatives to continue to make their case that any long-term funding of Homeland Security should be tied with an effort to undo Obama’s executive actions on immigration. The New York Times reported tonight that Boehner plans to bring a vote on a “clean” long-term funding bill next week.

House Minority Leader Nancy Pelosi, D-Calif., seemed to hint at a possible deal with Boehner in a letter she sent to Democratic colleagues, writing, “Your vote tonight will assure that we will vote for full funding next week.”

A Boehner spokesman quickly assured that there was “no such promise” made.

The Senate this afternoon already passed its own “clean” bill to fund Homeland Security through the fiscal year.

Senate Democrats defeated a second, separate bill—not tied to Homeland Security funding—that would have blocked money for Obama’s program to defer deportation for up to 5 million illegal immigrants and grant them work permits.

Even if they could not predict what would happen, conservatives lawmakers told The Daily Signal today that they were confident they could “win the public debate” on the issue.

“I think we could have won the public debate and we still may,” Sen. Jeff Sessions said in an interview with The Daily Signal. “The right thing to do would be for our leadership to develop a sustained campaign to explain the true situation and why our position is eminently reasonable. Congress has no obligation to fund any program that it doesn’t think is good and it absolutely has a duty not to fund unlawful programs.”

At the same time, Sessions, R-Ala., seemed to regret that the newly Republican-controlled Congress has not pushed harder against Obama’s actions.

“That’s not so. I am convinced a sustained, honest resistance to this overreach would have garnered strong public support and would have caused the president to back down from his absolutely unreasonable position. The trumpet sounded by Republicans was too uncertain and too many Republicans were saying there’s nothing we can do. And as a result, I think the president has a perception that his agenda can’t be stopped.”

Meanwhile, Democrats took joy in the early disagreements of the new Republican majority. “The Republican Congress has shown that it simply cannot govern,” said Senate Minority Leader Harry Reid, D-Nev., in a statement.

Democrats argue that funding Homeland Security, a vital agency that protects the nation from terrorists, illegal border-crossers and natural disasters, among other duties, should not be contingent on fulfilling another goal—stopping Obama’s immigration actions—that the president has no chance of supporting.

“This [a short-term solution] is the best of the worst options,” said Sen. James Lankford, R-Okla., in an interview with The Daily Signal. “There are no good options. We have to keep our eye on the ball: Stopping the president’s illegal actions. This would give us [more time]. It’s tough to guess at this point what will happen. We will find a way.”