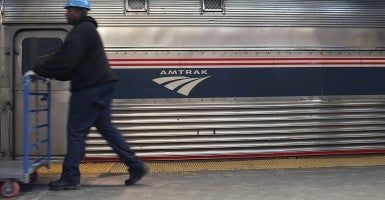 Don’t expect Amtrak to stop selling $16.15 burgers for $9.50—and asking taxpayers to subsidize the loss.

In a 2012 House Transportation and Infrastructure Committee hearing, then-chairman Rep. John Mica, R.-Fla., expressed outrage about Amtrak’s $16.15 hamburgers: $9.50 is paid by passenger and the rest subsidized by taxpayers. He went on to say that Amtrak’s $84 million loss in 2011 translated to a $68,000 taxpayer-funded subsidy for every Amtrak food and beverage employee.

Three years later, taxpayers are still losing—and a new passenger rail reauthorization bill that governs the passenger rail service known as Amtrak and its federal subsidies in the House isn’t likely to change the status quo.

One reform provision (Sec. 206) in the bill is aimed at stemming losses on Amtrak’s food and beverage services. Unfortunately, it would allow for paltry results at best.

Enforcement—meaning a penalty with “teeth” and an aggressive time frame in which Amtrak must produce results—is needed to effect changes that will benefit Amtrak management, passengers, and taxpayers.

Since 1981, Amtrak has been required to end its food and beverage service losses. Congress hasn’t enforced that statute, and Amtrak’s losses have continued. A 2013 Amtrak Inspector General report found that from “fiscal year (FY) 2006 through FY 2012, the food and beverage service incurred more than $609 million in direct operating losses,” or an average annual loss of $87 million.

Amtrak still loses money on food and beverages in part due to high labor costs (employees are covered under the Railway Labor Act). Instead of tackling that or other issues, the House rail bill requires Amtrak to “develop and begin implementing a plan to eliminate, within 5 years…the operating loss associated with providing food and beverage service” on its trains. After five years, no federal subsidies could cover losses for the on-board service.

The math is simple. This passenger rail bill authorizes funding for four years (fiscal years 2016 through 2019). Amtrak has five years to make changes. The new Congress that presumably would consider future Amtrak subsidies at the end of fiscal year 2019, one year before Amtrak would be penalized for continued losses. A new Congress may see no reason to enforce this penalty and could override it by permitting subsidies for the food and beverage service, no doubt with a provision requiring another study and plan to stop future losses.

Amtrak has had years to stop losing money. Here are options for Congress to force corrective action at Amtrak:

Congress should also ultimately seek to privatize Amtrak, ending federal subsidies altogether. In the near term, Congress needs to force Amtrak to act, instead of letting this train leave the station.