As US Grapples With Global Threats, This Is How We Should Approach National Security 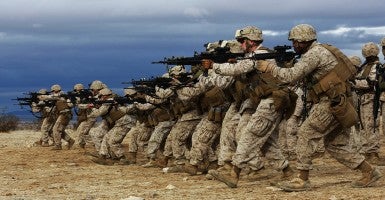 In one of his first actions as secretary of defense, Ashton Carter met over the weekend with top U.S. officials to determine a path forward in the fight against ISIS.

While threats have clearly grown, the president has sought to shrink military capability.

This radical Islamic group has increasingly shown the gruesome lengths it is willing to go to achieve its goals, and has also shown a knack for expanding its reach with atrocities such as a recent mass execution of Egyptians in Libya.

This alone is enough to consume much of the defense secretary’s time and effort, but it is only one of the threats the United States faces all over the globe.

Stability in Yemen has almost completely collapsed. Russia continues to push further into Ukraine. Tension mounts between China and its neighbors over territorial disputes. With these growing threats around the globe, the challenges facing the U.S. military are daunting.

One would think this has inspired the White House and Congress to take their commitments to national security more seriously, but the opposite has actually occurred over President Obama’s tenure as commander-in-chief.

While threats have clearly grown, the president has sought to shrink military capability. Congress has followed this with spending cuts such as those required by sequestration.

It’s clear that policymakers aren’t fully understanding their constitutional responsibility to provide for the common defense.

One possible reason politicians have failed to maintain the strength of the U.S. military is because they have misunderstood what problems our security posture is facing.

Before looking at what programs to dedicate more or fewer taxpayer dollars to each year, the executive and legislative branches should be asking the following question: What does the United States need to defend its security and interests at home and abroad in a constantly changing political and global escape?

That’s a question that Congress, the American public, defense analysts and even the military are challenged to determine the correct answer to.

One reason for that is while many publications assess pieces of the security puzzle, there is no consistent, accessible reference that enables people to comprehensively understand the status of U.S. military, especially on a year-to-year basis.

Today, The Heritage Foundation releases its first-ever Index of U.S. Military Strength. This publication assesses in a new way America’s ability to uphold one of its primary Constitutional responsibilities—to provide for the common defense.

We see as central to all U.S. military activity the protection of three critical interests: safeguarding the homeland from external attack, preventing a major power threat in key regions that would be devastating to U.S. interests, and maintaining the freedom of the commons, or the sea, air, space, and cyberspace that facilitate the free flow of goods and services.

The index provides insights on the threats and opportunities around the world, as well as the direction our military is headed in terms of providing for our security. Here are a few of the broad findings of the index:

It has become increasingly clear that the world is not becoming a safer place. If the United States wishes to provide U.S. security and enable free societies and economic prosperity to flourish around the globe, the government needs to find a new path toward maintaining a strong national defense.