The Obama Administration Makes Its Next Move in the Immigration Fight 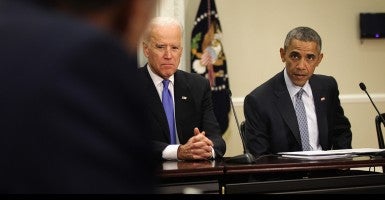 As expected, the U.S. Department of Justice filed an appeal today with the Fifth Circuit Court of Appeals in Texas v. U.S. This is the lawsuit filed by 26 states against President Obama’s unilateral amnesty plan for illegal immigrants.

The Justice Department will be asking the Fifth Circuit to overturn the Feb. 17 order of U.S. District Judge Andrew Hanen. The ruling granted a preliminary injunction against the government and prohibited any implementation by the Department of Homeland Security of the “deferred action” policy—namely, the executive actions Obama took in November that would lead to legal status for current illegal immigrants

At the same time that it filed the appeal, the Justice Department also filed an emergency request with Hanen asking him to stay his injunction order pending the outcome of the appeal.

In a 20-page memorandum, the Justice Department argues that a stay of the injunction is necessary to ensure that the Department of Homeland Security “is able to most effectively protect national security, public safety, and the integrity of the border.”

The Justice Department says the president’s amnesty plan is “an integral part” of Homeland Security’s “comprehensive effort to set and effectuate immigration enforcement priorities that focus on the removal of threats to public safety, national security risks, and recent border crossers.”

The government claims it will suffer “irreparable harm” if the injunction stays in place and that it will also harm the public and “third parties.” The “third parties” who will be harmed are apparently the five million illegal aliens who will be deprived of the “humanitarian benefits of prompt implementation” of the amnesty program.

In Obama’s view, spending hundreds of millions (if not billions) of dollars in order to build up a new bureaucracy capable of processing and reviewing application forms from five million illegal aliens is a way of efficiently using ‘limited resources.’

Of interest in the memorandum are the admissions the government makes in its arguments about the supposed harm it will suffer if the injunction stays in place. These admissions are particularly relevant to the current debate going on in Congress over funding of the Homeland Security Department.

According to the Justice Department, “DHS had already begun preparing to effectuate” the president’s policy. In fact, the department “had spent the prior 90 days—the time period established by the Guidance for implementation—preparing to receive such requests” for deferred action by illegal aliens by, among other things, leasing office space and initiating “the hiring process for employees.” Ceasing these efforts would “incur considerable administrative costs in the future to repeat the preparatory work.”

What is so odd about the government admitting how much it is spending to “prepare” to process millions of applications for deferred action is that in the same memorandum it claims that the deferred action program is the best way of “securing the Homeland in the face of limited resources.”

So in Obama’s view, spending hundreds of millions (if not billions) of dollars in order to build up a new bureaucracy capable of processing and reviewing application forms from five million illegal aliens, issuing them social security numbers and work permits, and revising all of their records within Homeland Security and the immigration court system, which apparently has already involved obtaining new office space and hiring new government employees, is a way of efficiently using “limited resources.”

The memorandum also contains two odd affidavits, one from Sarah Saldana, the director of U.S. Immigration and Customs Enforcement, and one from Gil Kerlikowske, the commissioner of U.S. Customs and Border Protection, that show what a Twilight Zone Obama’s top political appointees live in.

Saldana bizarrely asserts that the order preventing the deferred action program from being implemented “interferes with the Federal Government’s comprehensive strategy for enforcing our immigration laws.” But as we all know, Obama’s “comprehensive strategy” is the exact opposite of “enforcing our immigration laws.” Hanen agreed with the claims of the states in this case that “the Government has abandoned its duty to enforce the law. This assertion cannot be disputed.”

Kerlikowske’ s affidavit is also at odds with reality, given that he claims the injunction will impair the border patrol’s “ability to ensure that its limited enforcement resources are spent in the most effective and efficient way to safeguard national security, border security and public safety.”

But Hanen pointed out that Kerlikowske’s agency has already entirely failed to secure the border, a failure that has “exacerbated illegal immigration into this country.” In fact, it is information about the benefits of the president’s amnesty program that is leading to even more illegal immigrants being “encouraged to come to the United States.”

If Kerlikowske were really concerned with border security, he would be against any new government program that acts like a lodestone for immigrants to illegally cross the border so they can get all the paperwork they need to live and work in the U.S.—which is exactly what Obama’s immigration plan will do. Hopefully, Hanen will deny the request for a stay and leave the injunction in place.