The Government Gave Close to 1 Million HealthCare.gov Customers the Wrong Tax Information. Here’s Why That Matters. 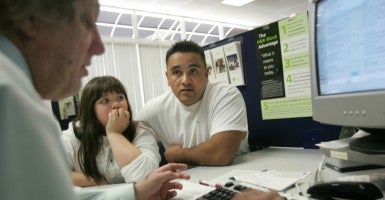 In an error that could delay the delivery of tax refunds for close to 1 million Americans, the federal government announced today that 800,000 HealthCare.gov customers received the wrong tax information.

Officials from California announced yesterday 100,000 consumers who purchased plans from the state’s exchange, Covered California, were also affected by a similar problem. Because of the error, government officials are requesting those involved delay filing their taxes.

“Without that information, it is not possible for the taxpayer to complete the form they have to complete to reconcile the credits on their taxes,” Ed Haislmaier, a health policy expert at The Heritage Foundation, told The Daily Signal. “That means they can’t file their taxes.”

Consumers who bought health insurance through the federal exchange and received tax credits were mailed a statement from the government — called Form 1095-A — in February. The notice informed enrollees about the cost of the second-lowest Silver plan for their area and how much they received in tax credits.

However, the Department of Health and Human Services discovered that close to 20 percent of those who used subsidies received the wrong information on the form, which is necessary for consumers to reconcile their tax credits and file their taxes.

The Obama administration asked those who received the erroneous information to delay filing their taxes. Those who already did so, roughly 50,000, will receive additional information from the Department of the Treasury.

“These people will not be able to file their taxes, and they will be in limbo—if they owe money, if they’re getting a refund—until all of this is completed,” said Ed Haislmaier. “Some probably will not be happy campers.”

“These people will not be able to file their taxes, and they will be in limbo—if they owe money, if they’re getting a refund—until all of this is completed,” Haislmaier said. “Some probably will not be happy campers.”

>>> Yes, It’s Legal for Obama to Create a Special Enrollment Period for Obamacare

The news came as the Department of Health and Human Services announced it would open a special enrollment period for those who didn’t purchase coverage for 2015.

HHS Secretary Sylvia Mathews Burwell originally said it would be two weeks before she decided whether to open a special enrollment period for the uninsured. But, the Department of Health and Human Services announced today those who are uninsured can enroll beginning March 15 through April 30.

“Our intention is that this is one year only, for people who have not been in the communication loop,” Andy Slavitt, principal deputy administrator at the Centers for Medicare and Medicaid Services, said.

Burwell was under pressure from Senate Democrats who sent her a letter pushing for the enrollment period. They argued that many people who were uninsured in 2014 will be surprised to learn when they file their taxes that they have to pay a fine for not having insurance.

A special enrollment period would give those uninsured for 2015 a chance to avoid having to pay the penalty—$325 or 2 percent of one’s household income— in 2016.

However, Haislmaier argued the special enrollment period could set a dangerous precedent.

“It’s one more in a long list of attempts by the administration to limit the blowback from Obamacare by waiving, delaying, modifying and doing over various provisions,” Haislmaier said. “The more that HHS and the states extend and create these special enrollment periods on the fly, the more they give the impression that the deadlines don’t matter. In the long run, that’s going to cause more problems.”