Congress Is About to Impose Another Unfunded Mandate on Doctors 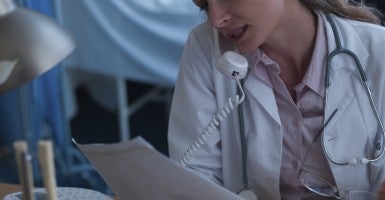 John Grimsley is a current graduate fellow at the Center for Health Policy Studies at The Heritage Foundation and a medical student at Georgetown University. He has two masters' degrees, an extensive background in clinical and pre-clinical research and a strong interest in how policy affects healthcare.

Doctors in their day-to-day practice already face a mound of federal regulations.

Now, starting Oct. 1, doctors will face a new unfunded mandate as they will be required to transition to a costly and complicated coding system for payment.

While the International Classification of Diseases (ICD) system was originally designed specifically for disease classification, since the 1980s, public and private payers alike have required that health care providers use the ICD-9 system when they file reimbursement claims. If, for instance, you go to the doctor’s for treatment for the flu, the doctor’s office will use the ICD code for flu when billing your insurance.

But unless Congress acts, the current ICD code will be replaced Oct. 1 by the vastly more complex ICD-10.

Last week, the House Energy and Commerce Subcommittee on Health held a hearing to examine the implementation of the upcoming ICD-10. Most of the testimony focused on how the health care IT community is ready for implementation.

As many as 25 percent of physician practices are not ready for the new ICD-10 system.

However, what about private practices, hospitals, state governments and the Centers for Medicare and Medicaid Services? Are they ready?

A recent Government Accountability Office (GAO) report has been referenced as providing evidence that Centers for Medicare and Medicaid Services has undertaken a number of efforts to prepare for the October transition and therefore implementation should proceed as planned.

What seems to have been ignored, however, is the twenty of 28 stakeholders contacted by the GAO that had serious concerns about the Centers’ outreach and education efforts as well as the lack of adequate testing.

According to the congressional testimony of Dr. William Jefferson Terry, a practicing urologist in Mobile, Ala., as many as 25 percent of physician practices are not ready. Although this is a numerical minority, they cannot be ignored. Many of these practices are small, independent practices in rural locations with narrow operating margins. If faced with substantial reimbursement disruptions due to ICD-10, they may be forced to close their doors and they will not be easily replaced.

Moreover, as of November 2014, only two Medicaid programs had tested the system and another 23 are still updating their systems and not yet able to begin testing, according to Robert Tennant, director of health information technology policy for the Medical Group Management Association. If a state government isn’t ready for the transition, doctors will not be reimbursed for seeing Medicaid patients.

Although a more detailed disease classification system may sound like a good thing, there are significant costs and tradeoffs. Most importantly, the majority of the burden of transitioning to ICD-10 will fall on health care providers, especially doctors in smaller, independent practices.

So, the benefits are vague and long-term, while the financial costs of investing in software programs, hiring and training new staff and productivity losses are real, immediate and quite large.

The reality of medical practice is that doctors do not treat codes; they treat patients according to the individual clinical condition. A doctor gets far more meaningful information from talking to the patient and consulting their medical record than they could ever get from the most detailed coding system. Therefore, doctors, who will bear the majority of the burden of transitioning to ICD-10 will see little, if any, benefit in treating patients on a day-to-day basis.

Given the disastrous roll-out of Obamacare, the already burdensome impact of the reams of federal rules and regulations imposed on doctors and other medical professionals, and the fact that many medical practices are not ready, Congress should be careful when considering imposing another unfunded mandate on the medical profession.