It Was Unconstitutional Before It Wasn’t: Democrats in Their Own Words 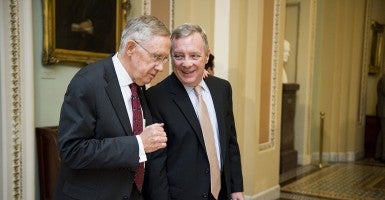 Hypocrisy is a given in Washington.

So much so that Senate Democrats must believe no one notices just how much of it they are guilty of in their attempts to prevent Congress from funding the Department of Homeland Security.

First, Democrats say they want to fund Homeland Security–yet they have filibustered any and all attempts by Republicans to even bring the bill up for debate.

Second, while numerous Democratic senators have made public statements saying President Obama was wrong to take executive action to change the country’s immigration laws without consent from Congress, none of these folks now appear willing to vote for or even discuss the Department of Homeland Security funding bill that would prevent Obama’s executive amnesty plans from taking place.

And then late last week, Sen. Dick Durbin (D-Ill.) made the suggestion that the Senate do something he said just a few years ago was unconstitutional.  He recommended the Senate create its own Homeland Security funding bill, pass it, and send it to the House.  But back in 2007, Durbin was emphatic that the Constitution required all spending measures to begin in the House.  During a debate with Sen. John Cornyn (R-Tex.) over appropriations, he said the following:

This is a Senate appropriations bill. As the senator from Texas knows, the Constitution requires that spending bills originate in the House. So the House would either object or ignore this bill or blue slip the bill in a way that would mean that whatever we would do here would not achieve the result asked for by the senator from Texas. (Durbin, Congressional Record, 12/11/07)

On another occasion, but making the same “all spending bills must originate in the House” argument, another Democrat, then-Senate Majority Leader Harry Reid (D-Nev.) put it this way: