‘We Love This Land’: Iraqi Christian Men Fight to Keep ISIS Away From Homes 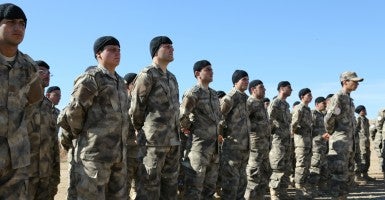 A battalion of Assyrian Christian men train at a former U.S. military facility outside the city of Kirkuk, Iraq. (Photo courtesy: Kaldo Oghanna)

Athra Kado had never shot a gun before, let alone seen a battlefield.

Until recently Kado, 25, spent his young career in a classroom, teaching high school students how to speak Syriac, his native language.

But Kado is one of hundreds of Assyrian Christian men—many with no military experience—taking up arms to protect their towns from ISIS terrorists who invaded this part of Iraq early last year.

“If we don’t have land to live, what’s the purpose of teaching a language?” Kado tells The Daily Signal in a Skype interview from a former U.S. military facility outside the city of Kirkuk, where he is finishing up a training camp with 500 or so amateur fighters.

Recruits to the new Christian militia, or battalion, say their villages and families were abandoned by Iraqi government and peshmerga forces last summer, letting the terrorists seize control.

Since then, some 30,000 Christians have fled the Nineveh plains—an area inhabited by minority groups such as Iraqi Christians, Yezidis and Shabaks.

Without official government support, and with minimal equipment primarily funded through donations, the young Christian men—most in their early to mid 20s—feel a responsibility to defend their own.

“We saw that nobody was doing anything for us,” says Kado, whose home town, Al Qosh, is the only Christian town in the Nineveh plains free of ISIS control. “We know that we don’t have another chance if we don’t fight for ourselves. No one is protecting us. We want to make a change.” In late January, the Kurdistan Regional Government’s peshmerga—a leading force fighting ISIS that receives American support—offered up the Kirkuk training facility as the grounds for the Assyrian Christian battalion to learn military might.

“This is our right as human beings and as indigenous people: to protect our people and ourselves,” says Kaldo Oghanna, a party official from the Assyrian Democratic Movement who oversaw the training. “It is not logical for people south and north [of here] to secure this area.”

”This is our right as human beings and as indigenous people: to protect our people and ourselves,” says @KaldoRamzi.

Kado, the young fighter, said at least four Americans—volunteers with military experience—are helping train the men to use weapons such as automatic rifles, mortars, machine guns, AK-47s and rocket-propelled grenades.

Fighters acquire skills fast, because they have to. They train from 7 a.m. to 9 p.m. every day.

“When someone wants badly to do something, everything is easy for him,” Kado says.

“Me and my friends are getting this information so fast. We want to do that. We will go to our villages and towns and protect them so ISIS can’t come to our families.”

The training wraps up Thursday, when the civilian fighters are expected to be able to defend their turf.

Oghanna says the training of Iraqi Christian fighters has occurred without financial support from the Iraqi, Kurdish or U.S. governments.

Donations, mostly from Assyrians abroad, fund everything from guns to bullets to food. The training of Iraqi Christian fighters has occurred without financial support from the Iraqi, Kurdish or U.S. governments. (Photo courtesy: Kaldo Oghanna)

He hopes the United States steps forward—help that may be on the way.

The U.S. National Defense Authorization Act, approved in December, includes language to train and equip fighters against the Islamic State.

As part of the legislation, up to $1.6 billion should go toward support for units such as the Iraqi Army, Sunni tribal fighters, peshmerga and local forces protecting “vulnerable” minority groups in the Nineveh plains.

“The U.S. supports many groups [fighters], especially in Syria, where many of them convert to join ISIS,” Oghanna says. “We know it’s complex [to decide who to support], but we are for sure not going to convert to ISIS.”

The Assyrian Christians, who consider themselves the indigenous people of Iraq, want to survive on their terms.

For Kado and the battalion fighters, that means staying in their villages, no matter that ISIS militants want to wipe Christianity out of Iraq.

Oghanna says there are currently less than 400,000 Christians living in Iraq, down from about 1.6 million in 2003. Most have fled.

Kado will not. His family’s roots in Al Qosh date back 400 years. More than 400 families from other Christian villages have come to Al Qosh to seek shelter. So Kado stays.

“We don’t want to be refugees in another country,” Kado says.

Adds Oghanna, “It would be bitter for us to migrate to Europe and the U.S.”

Kado has great respect for America.

He listens to American music, and he learned English through the songs and lyrics of Whitney Houston.

Two of his brothers live in Detroit.

“I want to vacation in the U.S.,” Kado says, smiling sheepishly, listing Las Vegas as a spot he hopes to visit. “But I want to stay and live here.”

Kado is risking everything to stay—to be the guardian of his religion, his land.

“I have thought about dying,” Kado says. “But the most important thing I’ve learned in the camp is discipline. It’s not just Christianity. If it was just Christianity, I could be Christian in Europe. It’s a matter of … this is our land. We want to live on it. We love this land.”

If you wish to donate to the Assyrian Christian militia, click here.