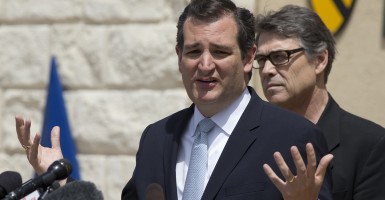 Would-be successors to President Obama wasted little time aligning themselves with a federal judge who blocked the president from unilaterally allowing up to 5 million illegal immigrants to stay here and get work permits.

Although neither Hillary Rodham Clinton nor any other Democratic hopeful was out front with a reaction, some of the likeliest Republican candidates warmly greeted U.S. District Judge Andrew Hanen’s temporary restraining order in favor of Texas and 25 other states. Hanen’s ruling stops government officials from moving ahead with Obama’s executive actions.

Fed judge overseeing lawsuit we joined with 25 other states against admin for exec actions on immigration issued a preliminary injunction.

The formal responses from White House hopefuls, some in reply to The Daily Signal’s request for comment, indicate an awareness that once more the race for president can’t avoid the issue of how or whether to legalize the status of some 11 million illegal immigrants.

“The president’s action was a blatant overreach of executive power, an affront to the rule of law, and put partisan politics in front of lasting solutions,” former Texas Gov. Rick Perry said in a statement sent to The Daily Signal yesterday afternoon.  “He put the legal status of millions of immigrants in question, adding confusion –not clarity — for these individuals.”

The 26 states challenged Obama’s executive actions to remove the threat of deportation without an act of Congress. Hanen’s order prevents the president from making the disputed changes to the immigration system — what many critics call executive amnesty — until the facts of the states’ legal challenge can be heard.

>>> Q&A: What You Need to Know About The Court Order Stopping Obama on Immigration

Another Texas Republican, Sen. Ted Cruz, was among the first White House hopefuls to comment, following up today with an online discussion set for 5 p.m. EST:

This is a major victory for the rule of law http://t.co/BuhtAwf6CD #StopObamasAmnesty

“This is a major victory for the rule of law. The District Court’s ruling states that President Obama must now stop implementing these policies in ‘any and all aspects,’” said Cruz, a lawyer who for five years argued the state’s positions as the solicitor general appointed by Abbott when he was attorney general.

The Senate Democrats who are filibustering DHS funding should look hard at this ruling. http://t.co/omMlEg9nfz pic.twitter.com/z5NJwpTpmF

Louisiana joined this lawsuit because what the president is doing to grant amnesty to millions of illegal aliens is unconstitutional, and we’re glad the court agreed. On his own volition, President Obama ignored the law and the will of the American people. President Obama did this on his own because he knows the American people reject the idea and he couldn’t pass it in Congress. Fortunately, the rule of law is something President Obama cannot sidestep. Now it’s time for Congress to once and for all secure the border.

“President Obama did this on his own because he knows the American people reject the idea and he couldn’t pass it in Congress.” –@BobbyJindal

Perry, like Jindal, also urged Congress “to act quickly to pass a bill to secure the border once and for all.”

Also out with a carefully worded response to the judge’s 123-page decision and order was Jeb Bush, the former Florida governor who in the past has embraced a path to citizenship for immigrants here illegally.

A spokesman for Sen. Marco Rubio, R-Fla., who co-sponsored the Senate-passed comprehensive immigration reform bill in 2013, said he had anticipated such a decision.

“Senator Rubio has repeatedly said that the president’s executive actions are unconstitutional, and so we’re not surprised by the judge’s ruling,” spokesman Alex Conant told The Daily Signal. “Fixing our broken immigration system should be done through legislation, starting with border security and internal enforcement.”

>>> Commentary: Unconstitutional Before It Wasn’t? Democrats in Their Own Words

“Carly believes this administration has acted unconstitutionally and has been particularly lawless when it comes to expanding their immigration powers while refusing to secure the border,” Flores said.

Despite what Obama thinks, our Constitution doesn't allow him to just invent new immigration laws. pic.twitter.com/nlABkgSbfj

Mike Huckabee, the former Arkansas governor and 2008 campaign veteran, said in a statement from Little Rock that Hanen “rightly draws a line in the sand on President Obama’s unconstitutional executive orders.” Huckabee added:

President Obama has a fundamental lack of understanding of the Constitution and executive authority.  Despite what he thinks, our Constitution doesn’t allow the president to just invent new immigration laws.  This ruling is a battle victory in the war against the president’s unconstitutional overreach.

Some GOP hopefuls passed up the opportunity to weigh in. A spokesman for retired neurosurgeon Ben Carson, who appears to have significant grassroots support for a race for president, told The Daily Signal that Carson would have no comment at this stage.

Judge Hanen's usage of the 1946 Admin. Procedure Act regarding immigration shows how President Obama exceeds his powers with exec. orders

Spokesmen for other Republican presidential hopefuls – among them Walker, Paul, New Jersey Gov. Chris Christie and former Sen. Rick Santorum of Pennsylvania  — did not respond to The Daily Signal’s requests for specific reactions. Paul did tweet on the subject late yesterday and again today, though:

Like Jindal, Cruz drew a line between the ruling and the current impasse in Congress over funding for the Department of Homeland Security as a result of Obama’s executive actions to change the immigration system – which falls under that agency.

“Last summer we saw a humanitarian crisis on our southern border that was a direct consequence of Obama’s previous amnesty,” Cruz said, adding:

Republicans are now standing together to try to ensure that it never happens again. The Senate Democrats who are filibustering Department of Homeland Security funding should look hard at this ruling. At a time when we face grave national security threats, at home and abroad, it is the height of irresponsibility for the Democrats to block this funding in an extreme attempt to save Obama’s amnesty, which a federal judge has just declared illegal.

Add your name if you are proud of Texas leading the way to #StopObamasAmnesty: http://t.co/iEvqO5AWxe pic.twitter.com/XQ1qvPFn9q

This report was updated.