Study: Obama’s Carbon Rules Could Cost Thousands of Manufacturing Jobs in Your State 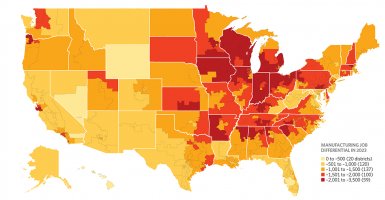 A new study predicts that more than a half million manufacturing jobs will be eliminated from the U.S. economy as a result of the Obama administration’s proposed regulations to curb carbon dioxide emissions.

“Every state would experience overwhelming negative impacts as a result of these regulations, but especially those with higher-than-average employment in manufacturing and mining,” said Nick Loris, a co-author of the study, which was completed by energy experts at The Heritage Foundation—the parent organization of The Daily Signal.

The researchers projected how many manufacturing jobs would be eliminated in each state and congressional district as a consequence of the carbon plan, which is the centerpiece of President Obama’s effort to combat climate change. The study predicts that the Midwest would be hit the hardest, with Illinois, Indiana, Michigan, Ohio and Wisconsin losing more than 20,000 jobs each.

“Because America’s industrial base relies on affordable, reliable energy, these regulations would deal a crushing blow to the manufacturing sector, particularly impacting the Midwest.” -Nick Loris.

On a local level, 68 percent of U.S. Congressional districts are expected to lose more than 1,000 manufacturing jobs.

Loris says the manufacturing sector is an “important piece of the puzzle” that should not be overlooked when considering the administration’s proposed rule meant to limit carbon pollution.

“Our analysis shows that it’s not just coal-country that’s hit hard by the federal government’s climate regulations,” he said. “Because America’s industrial base relies on affordable, reliable energy, these regulations would deal a crushing blow to the manufacturing sector, particularly impacting the Midwest.” The analysis comes just months before the Environmental Protection Agency is set to finalize its carbon regulations covering new, existing and modified/reconstructed power plants by mid summer of 2015.

Heritage’s study looked at the totality of the Obama administration’s efforts to limit carbon dioxide emissions—from motor vehicles and power plants, both new and existing.

The EPA’s plan forces states to cut power-industry emissions by 30 percent in 2030 from 2005 levels.

In response to the study, EPA Press Secretary Liz Purchia argued that action against climate change does not dull America’s competitive edge. Rather, it sharpens it. She told The Daily Signal:

The energy sector sees the writing on the wall. Businesses like Spectra Energy are investing billions in clean energy. And utilities like Exelon and Entergy are weaving climate considerations into business plans. This means more jobs, not less. We’ll need thousands of American workers, in construction, transmission, and more, to make cleaner power a reality.

Purchia points to “more than 200 U.S. companies” who came together to voice their support for the administration’s climate plan—including Kellogg’s, Starbucks, Ikea, Levi Strauss and Nestlé—as proof that the regulations are good for the economy.

“[B]usinesses are concerned about the immediate and long-term implications of climate change. As they said, ‘Tackling climate change is one of America’s greatest economic opportunities of the 21st century,’” said Purchia.

The EPA’s proposed regulations work by setting target emission caps for each state based on assumptions about how much that state can reduce its carbon dioxide emissions.

Once targets are established for each state, the EPA tasks states with writing their own plans for how they will comply with the those guidelines.

In addition to reaching the EPA’s 2030 goal, states must also comply with guidelines set for 2020, as a way of demonstrating their progress.

Many states have called the EPA’s goals unrealistic and are pushing back against the proposed regulations.

While some like Oklahoma are lobbying for substantial changes to the 2020 interim targets, others, like Louisiana, are calling to scrap the policies altogether.

Responding to those complaints, EPA Administrator Gina McCarthy on Tuesday backed off those state deadlines, hinting that there would be flexibility in when states must meet their carbon-cutting targets.

“We want the states to have flexibility to explore options,” McCarthy said at a conference of the National Association of Regulatory Utility Commissioners in Washington. But even with those concessions, Loris predicts the regulations will stifle business owners.

“To attract state buy-in, the EPA is touting these regulations as being cooperative with the states and awarding the states flexibility in crafting the regulations,” Loris said. “But flexibility would merely shift the costs around, not prevent them from happening.”

Instead of trying to cash in and protect special interests, both federal and state legislators should flat out reject the administration’s plan. That is the only true way to protect the families and business owners in their states.