How We Can Honor Edward Brooke, a Great Trailblazer 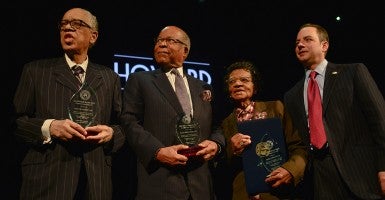 When people think of history makers, they may first think of those whose accomplishments rest upon specific moments in their life. However, there are individuals whose actions over a lifetime create ripple effects for many years to come. A man of this exact nature, the late Sen. Edward Brooke, R-Mass., served as the inspiration for the Republican National Committee’s third annual Black Republican Trailblazer Awards Luncheon held last week.

Serving as the first African-American elected to the U.S. Senate in 1966, Brooke paved the way for future men and women of color and deserves to be remembered during Black History Month. The phrase “we stand on the shoulders of a great trailblazer,” was expressed countless times at the luncheon as everyone paid tribute to Brooke’s momentous achievement.

But his election was only the beginning. As he served in the Senate, Brooke helped usher in a new way of thinking: looking beyond the physical characteristics of a person and judging him based on his actual abilities. Brooke said it best himself: Don’t vote against me because I am black or even vote for me for that same reason, instead, “I’m asking you to vote for me because you believe I have the qualifications, the intellect, the work ethic.”

A message such as this seems rudimentary today, but it wasn’t then, with many Americans facing a glass ceiling. Only when people of all backgrounds and creeds recognized this truth could our nation change. As Sen. Tim Scott, R-S.C., said during the luncheon, “In South Carolina, in America, it takes a generation to go from having a grandfather who is picking cotton to a grandson in the United States Congress.”

To look only on a person’s ability and not his or her features is an encouraging and inspiring message for all Americans and one that was celebrated throughout the festivities. The importance of it was underscored with the decision to have Tara Setmayer Love, a CNN political commentator, and Roland S. Martin, TV One host and managing editor, co-host the event. Martin and Love have debated over ideological differences in the past, but they agreed on the message of this event.

So what’s next? Well, I couldn’t agree more with what Republican National Committee Chairman Reince Preiebus said: it’s time to reach into communities, all communities, and present a message of “opportunity for all.”

The desires of past trailblazers, from Brooke to Martin Luther King, Jr., were to see this generation continue and learn from the previous lessons, looking beyond racial differences, and move towards a discussion on what is best for all Americans. Whether individuals are conservative or liberal, each should propose policies and initiatives that present solutions to the problems facing the American people.

Organizations like The Heritage Foundation have made strides to promote bold solutions but a battle of ideas is necessary to show clear, alternative courses. “A country is stronger when two parties must fight for a vote, where there is a public debate of ideas,” said Tara Love.

The same can be said for policies in this country.

Americans are forever indebted to the likes of Brooke and others that paved the way for our generation and those that continue to do so. Now is the time to honor what they fought so hard to move toward.

As was suggested by Woody Johnson, owner of the New York Jets, it is an honor to recognize these trailblazers but it will be a great day when we no longer are celebrating firsts—a day when these accomplishments are no longer exceptions, but the norm.

This is what we all should want.