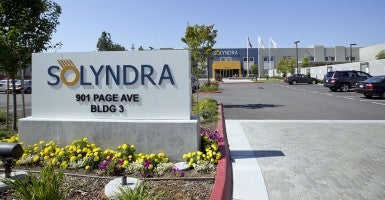 At the recent inauguration of the Desert Sunlight solar farm, Secretary of Interior Sally Jewell stated, “This is the beginnings of a renewable energy future.”

Here’s how the scam works. It begins with proposing to build a solar plant. But solar plants take up a lot of land. Gosh, that can be expensive. So, the government rents them the land at bargain prices.

The next problem is that solar plants are outrageously expensive, which is why real capitalists tend to shy away from solar energy. Luckily for the aspiring political crony, the government will help you get a loan guaranteed by taxpayers. (Just like the $500 million dollar loan they gave Solyndra, before it went bankrupt. Oops!) Added to all this, the federal government is willing to offer a 30 percent solar investment tax credit, a deduction of 30 percent of your cost from your taxes.

Now that there is money and land for the plant, what next?

Well, even with those unconscionable subsidies solar is still too expensive: utility companies prefer cheaper, more reliable energy. So then, the state government steps in to rig the market even more.

Of course, if renewable energy were already competitive there would be no need for the mandate. But it’s not.

So helpfully for companies like Desert Sunlight, California requires utility companies to meet “renewable portfolio standards,” which mandate that at least 33 percent of their energy come from renewable sources.

How uncompetitive is solar power? There’s no clear answer: California electricity consumers are kept in the dark.  The price of this renewable electricity is expressly kept secret from both taxpayers and consumers.

If the Desert Sunlight solar farm is the “beginnings of a renewable energy future,” then the future doesn’t look bright, for taxpayers, ratepayers and all Americans who think mega-corporations should make a living by selling their products, not by selling a bill of goods.

This article has been corrected to reflect that the market capitalization of Sumitomo Corporation is $13 billion, not $1.5 trillion as the article originally stated.