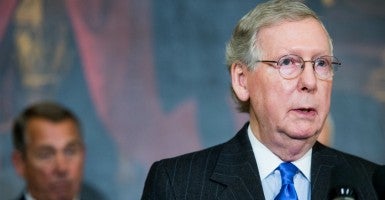 Republican members of Congress have introduced a joint resolution of Congress to try to stop a new National Labor Relations Board rule from going into effect this April.

According to a joint statement released by congressional Republicans last week, the “ambush election” rule, finalized last December, would decrease the amount of time a labor union certification election is held from over a month to a mere 11 days.

They argue that the rule limits the amount of time an employer has to communicate with employees before a union organizing election, thus hampering their ability to make an “informed decision.” They also claim that the rule would mandate that employers hand over their employees’ sensitive information–such as work schedules and personal contact information–without their knowledge or consent. The rule would also limit an employer’s time to find and pursue legal representation to one week.

The Republican members said that they can “halt implementation of the rule” under the Congressional Review Act, which allows Congress to bar federal agencies from implementing new rules and regulations without Congressional approval. However, they would need two-thirds of the members in both chambers to back the resolution.

The top Democrat on the Senate labor committee, Sen. Patty Murray, D-Wash., told the Wall Street Journal that “Republicans are making it clear that they are more interested in putting the profits of the biggest corporations ahead of the rights and opportunities of middle-class workers.”

James Sherk, a labor policy analyst at the Heritage Foundation, said the new rule “would probably shorten the election time period from the current five to six weeks to under two weeks.”

Sherk expressed concern that a shorter election period could hurt employees’ ability to make an “informed” decision about whether to unionize:

Union organizers spend months trying to sell workers on the benefits of unionizing. During the election campaign they hear the other side of the story from their employer.

Unions train their organizers to deflect questions about uncomfortable topics: union corruption, strike histories, bankruptcies, and union political spending. If the workers don’t hear this information from their employer—or don’t have time to consider it—they cannot make an informed choice.

“If getting an additional four weeks to think about joining a union local changes their mind,” Sherk concluded, “workers are probably better off without that union.”

NLRB Chairman Mark Pearce said in a statement that the rule would “modernize the representation-case process.”

“Both businesses and workers deserve a process that is effective, fair and free of unnecessary delays, which is exactly what this rule strives to accomplish,” said Pearce.

In a statement, Senate Majority Leader Mitch McConnell, R-Ky., criticized the “so-called ‘ambush’ rule” implemented by the Obama administration’s appointees on the NLRB.

“It’s designed with one purpose in mind — to fatten the wallets of powerful political bosses by threatening the rights of middle-class workers to make informed decisions of their own,” said McConnell.