The 10 Best (and Worst) States to Find a Job 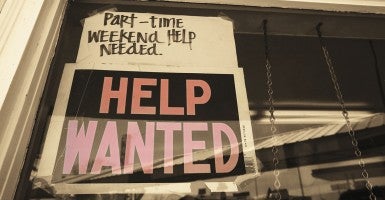 Is your state a good place to find a job?

A recent Gallup poll asked Americans if their employer is hiring or firing, and used the results to rank the job creation in each state.

Residents of North Dakota are most likely to report positive hiring conditions where they work, followed by Texas, Nebraska, Wisconsin and Michigan.

See where your state ranks here:

North Dakota has ranked No. 1 for six years in a row. Gallup noted that Michigan experienced one of the “sharpest turnarounds of any state” in the seven years its has conducted the survey.

Nick Loris, an economist who focuses on energy, environmental and regulatory issues at The Heritage Foundation, said North Dakota’s No. 1 ranking came as no surprise.

“Energy development on private and state-owned lands in North Dakota and Texas is a critical reason why they rank at the top,” said Loris. “The regulatory environment has allowed companies in these states to create jobs, grow the economy, and increased energy supplies to save families money—all while effectively protecting the environment.” In his recent State of the State address, Gov. Jack Dalrymple, R-N.D., said energy jobs were a large factor in his state’s success.

“We should all be proud of the vital role our state is playing to help America strengthen its energy independence,” said Dalrymple.

“Over the past 10 years, North Dakota’s economy has averaged an annual growth rate of 10.3 percent, nearly three times that of the nation’s economy,” he added. “We also continue to have the nation’s lowest unemployment rate at just 2.4 percent, and our growing commercial activity has created more than 106,000 new jobs in the past 10 years.”

Dalrymple said North Dakota’s “economic progress has not been confined to oil country,” and pointed out that the state’s population and personal income rates are growing as well.

James Sherk, senior policy analyst in labor economics at The Heritage Foundation, closely follows job growth. He noted that the labor market has slowly recovered since the recession ended. Last year represented a move in a positive direction.

“This recovery stands in marked contrast to the forecasts of Keynesian analysts who predicted that the sequester—a measure of spending restraint—and end of extended unemployment insurance benefits would harm the economy,” Sherk told The Daily Signal. “Instead, the economy has improved.”

“The states with the fastest job growth have been those that have allowed hydraulic natural gas and oil extraction, with Texas and North Dakota enjoying some of the strongest labor markets in the country,” Sherk said. “New York decided to ban this new energy extraction technique—harming its workers and labor market.”