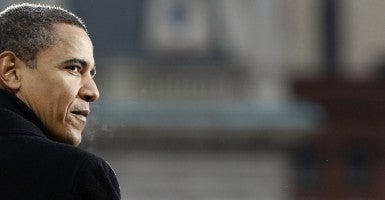 Among so many of President Obama’s flaws, near the top of the list is that he has never understood the art of the deal. Every successful president has cut deals with the other party to strategically advance his own agenda. Give a little, get a little. Washington, Lincoln, FDR, Reagan and Clinton were masters at this aspect of politics.

Obama rejected the convention of reaching across the aisle from the very start. In his first two years in office this White House never moved an inch in the GOP’s direction and passed his major bills on stimulus and Obamacare without a single Republican vote. Those bills were written with zero input from Republicans and when asked why, he haughtily lectured “we won the election.” Then he pouts the Republicans were no help.

What goes around comes around. Since the Republicans took control of the House in 2011 and now the entire Congress this year, Obama has been stymied. He still hasn’t budged an inch toward the center. His State of the Union address was effectively an ideological lead pipe, not a peace pipe. He declared war against the GOP and the policy agenda that won them the historic sweep in November’s elections. His second term is on pace to be an epic failure.

Liberals routinely pout that Republicans won’t work with President Obama cooperatively to get things done and that the GOP’s only goal is to destroy his presidency.Obama has done a pretty good job of that himself without an assist from House Speaker John Boehner and Senate Majority Leader Mitch McConnell. But who is that won’t cooperate?

In my interviews over the last several years with House Speaker John Boehner and the lead Republican in the Senate, Mitch McConnell, the two routinely expressed this frustration: Obama always changes the goal line during negotiations. Boehner once told me about the fiscal cliff budget negotiations “every time I thought we had a deal, this White House would go back on it.” He isn’t trustworthy.

Now Republicans are learning another harsh lesson about this White House: on those rare occasions when a deal is reached, Obama routinely breaches it. Consider the recent evidence:

• Death tax. One of the few bipartisan of recent years was to set the death tax at 40 percent. Now two years later, he says in his State of the Union he wants to raise taxes at death to closer to 60 percent. This would be nearly the highest tax penalty at death in the world.
• Capital gains taxes. Obama entered office with these rates at 15 percent. Then he said repeatedly he would “only raise them to the rate of the Clinton years.” That was a lie from the start because the rate under Clinton was 20 percent, but he raised it to 23.8 percent including the surcharge imposed under Obamacare. Now he says he wants to raise the rate to 28 percent, which he says was the Reagan-era rate. And if he gets that he will no doubt say he only wants to raise it to the Nixon rates–of more than 36 percent.
• Taxing college savings plans. Obama said he would only raise taxes on the rich. But then he proposed taxing the build up of money in college savings plans and that would club the middle class. The plan was so unpopular, the White House dropped it, but anyone with a Roth IRA or build up in a pension plan better be on guard. You’re next.
• Budget caps. The 2011 Budget Control Act set strict caps on discretionary spending. But Obama keeps proposing piercing those caps–which he himself proposed in the first place. His new budget for 2016 wants to crash through the spending ceilings to the tune of $74 billion this year.
• Paid family leave. When liberals sold the idea of parental leave back in the 1990s, they stressed over and over that this was only “unpaid” leave and so employers wouldn’t face undue costs. Now Obama and the Democrats want paid leave. Give an inch, they want a subsidized mile.
• Keystone XL Pipeline. Obama first said he was holding up Keystone because of environmental concerns in Nebraska with respect to water issues. But those issues have finally been resolved by the courts. Obama is now inventing new excuses for getting to “no.”
• Immigration. Obama’s executive actions–of questionable legality–legalizing millions of illegal immigrants seems to Republicans to be intentionally designed as a poison pill for immigration reform.

So is it any wonder that Republicans feel they’ve been burned once too often?

Ed Rollins, Reagan’s political adviser, attributes Obama’s incapacity to make a deal “to arrogance and incompetence–there is no one at the White House who knows how to reach across the aisle even when it is in Obama’s own self-interest.”

Obama’s goal is not to negotiate with Republicans but to steamroller over them. And by so doing, his party is in shatters, and the one who has been steamrolled is himself.