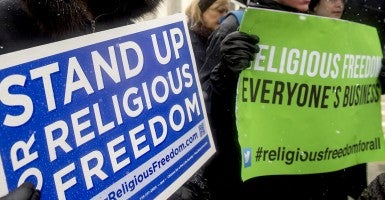 Rachel Miklaszewski is a member of the Young Leaders Program at The Heritage Foundation.

Chalk up another setback for religious freedom. Earlier this week, the U.S. Court of Appeals for the Third Circuit ruled against Geneva College and other non-profit religious employers in their challenge to the Obamacare mandate that forces employers to provide healthcare coverage of abortion-inducing drugs and devices.

You don’t have to agree with Geneva College or share its views on abortion to recognize that the government should not be able to force Americans to choose between their religious beliefs and the law. But that’s exactly what this mandate does.

Formal houses of worship and their integrated auxiliaries (such as church-run soup kitchens) are exempt from the Obamacare mandate. With regard to other employers, the Religious Freedom Restoration Act (RFRA) of 1993 prohibits the government from substantially burdening the free exercise of religion unless it can show that the burden is the least restrictive means of furthering a compelling government interest. Since the Obama administration issued the abortion drug mandate in 2011, hundreds of employers have attacked it in court under RFRA.

Non-profit religious employers, such as Geneva College, a Christian school in Beaver Falls, Penn., founded by the Reformed Presbyterian Church of North America, are eligible for an “accommodation” from the Obamacare mandate.  But to get it, they have to notify the Department of Health and Human Services (HHS) that they have a religious objection to providing or paying for coverage of potentially life-ending drugs and devices.  This initiates the process of the government forcing insurers and third-party administrators to provide the mandated coverage to employees. Geneva College challenged the accommodation, arguing that the causal link between the notice and the resulting provision of the objectionable drugs and devices substantially burdens its religious exercise.

In essence, Geneva College asserted that notifying HHS of its objection forced it to be complicit in an activity that violates its religious beliefs. A three-judge panel of the Third Circuit saw it differently:

[T]he self-certification form does not trigger or facilitate the provision of contraceptive coverage because coverage is mandated to be otherwise provided by federal law. Federal law, rather than any involvement by [Geneva College] in filling out or submitting the self-certification form, creates the obligation of the insurance issuers and third-party administrators to provide coverage…

But why would submitting such a form be necessary, if as the court says, it didn’t facilitate, trigger or somehow lead to the objectionable coverage?

Yet the court notes, “[F]ree exercise jurisprudence instructs that we are to examine the act [Geneva College] must perform—not the effect of that act—to see if it burdens substantially [Geneva College’s] religious exercise.”

By that same logic, the Supreme Court’s 1981 decision in Thomas v. Review Board would have turned out differently. In that case, the Court ruled in favor of a Jehovah’s Witness who was denied unemployment benefits after quitting his job as a steelworker because he was assigned to a department that produced tank turrets. Thomas believed that his religion forbade him from making war materials. But under the Third Circuit’s reasoning, a court should not look at the effect of Thomas’ act (i.e. what became of the tank turrets after Thomas worked on them), but only at the act of producing the turrets.

Courts cannot look at religious-based claims like these in a vacuum. It is precisely this dissecting of religious beliefs that RFRA was intended to prevent. As the Supreme Court stated in the Thomas case, “[I]t is not within the judicial function and judicial competence to inquire whether [Thomas] correctly perceived the commands of [his] faith. Courts are not arbiters of scriptural interpretation.”

Courts should not be in the business of line-drawing when it comes to theological questions. It’s not for the government to determine whether Geneva College is right or wrong about its religious beliefs and whether what it believes its complicity in an immoral act.