No Program Left Behind 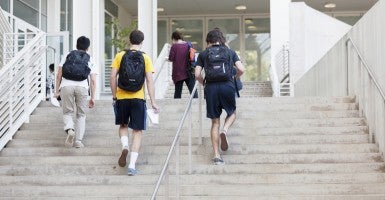 Congress is currently considering reauthorization of No Child Left Behind, the largest federal law governing K-12 education policy. The current House version of the reauthorization, the amended Student Success Act (SSA), passed out of the Education and the Workforce Committee yesterday.

The SSA is similar to a proposal first introduced in 2012 by Rep. John Kline (R-Minn.). Although the proposal makes some modest improvements to the behemoth NCLB – a fact we noted when it was first proposed in 2012 – the new makeup of Congress now allows for a far bolder approach.

As we wrote in 2012 when the prospect of advancing bold conservative alternatives to NCLB was bleak, the policy in the Student Success Act was “a good first step in replacing the wrongly directed accountability of No Child Left Behind.” In a follow-up policy review in 2013, we explained further that “the proposal contains policy shortcomings that overwhelm some of the improvements to existing statute that it could create,” which remains the case today.

According to the Committee, the bill consolidates more than 65 ineffective, duplicative and unnecessary programs into a Local Academic Flexible Grant. Consolidation isn’t good enough, and in fact, masks spending when programs are simply lumped into a larger umbrella grant. Those interested in restoring state and local control of education need to advance genuine program elimination, with commensurate reductions in spending.

It appears, however, that the eliminations are minimal (for example, for programs that haven’t been funded in years anyway) in favor of consolidating programs into the new Local Academic Flexible Grant. The proposal would spend $23 billion annually, which is roughly what is currently spent under No Child Left Behind. Specifically, the Student Success Act authorizes:

Beyond the Student Success Act, the draft reauthorization produced by the Senate Health, Education, Labor, and Pensions (HELP) Committee by Sen. Lamar Alexander (R-Tenn.) has gone back to the drawing board in order to broaden support. This likely means it will provide even fewer reductions in federal intervention. Moreover, the White House has already denounced the Student Success Act, suggesting that policy that shifts control from the federal to state levels will be further compromised as reauthorization progresses.

Bold reforms are needed, and they are missing from the current legislative efforts to deal with No Child Left Behind. Policymakers should empower states to completely exit the 600-page law in order to begin the process of devolving education authority back to states and localities, and, ultimately, families.