Does Marriage Make You Happier? What a New Study Found 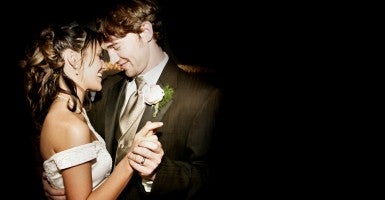 “Those who marry are more satisfied than those who remain single,” claims a new study by the National Bureau of Economic Research.

But does marriage itself influence happiness? Or is it just that happier people are more likely to wed?

This study gives support to the idea that marriage itself contributes to happiness. (In other words, even the grumps that get married may find themselves happier because they are married.) Another finding from the study is that that friendship is a mechanism that may explain the link between marriage and life satisfaction. In fact, those who see their spouse as their best friend benefit even more from marriage.

But, during National Marriage Week (Feb. 7-14), it’s good to remember that happiness isn’t the only benefit marriage brings.

For instance, married adults tend to live longer and be healthier. They also have higher incomes, and not simply because two incomes mean more money. Marriage itself appears to boost men’s salaries: they work more hours and earn higher incomes.

Marriage doesn’t just help adults: it also serves an especially important role in the lives of children. Children who live in intact families tend to have better educational attainment and exhibit fewer behavioral problems. They also experience better physical and emotional health and are more likely to experience economic well-being.

Unfortunately, even with the good news about marriage, marriage rates have continued to drop and are at an all-time historic low.

The marriage rate has fallen by approximately 50 percent since the 1960s. Since then, the number of couples who cohabit has risen to nearly 12 percent. However, cohabiting relationships do not have the same benefits as marriages. In fact, cohabitation before marriage is linked to decreased marital stability and lower marriage quality. According to a government study on cohabitation, the risk of divorce is specifically higher for women who cohabit before marriage.

This decline in marriage is particularly problematic for children.

As marriage rates have declined, unwed childbearing has skyrocketed. Now, over 40 percent of all children are born to single mothers. In more than half of these cases, the child is born to a single mother who is in a cohabiting relationship.

Children born outside of marriage are roughly five times more likely to be poor compared to their peers in married-parent homes and are at risk for other negative outcomes. Yet the vast majority of women value marriage, and most Americans desire to get married.

National Marriage Week, happening until Feb. 14, presents a chance to focus on rebuilding a culture of marriage for this generation.

Policymakers should focus on reforming policies that penalize marriage, as many means-tested welfare programs do. Cultural leaders should also make efforts to strengthen marriage, helping more Americans achieve the dream of a happy and stable marriage and receive all the benefits of the institution—for themselves and their children.