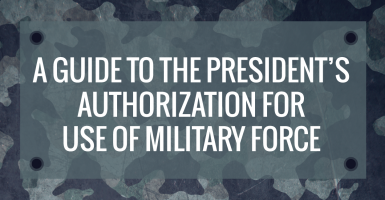 President Obama is calling on Congress to pass a three-year authorization of war against ISIS, also known as the Islamic State or ISIL.

The draft request, formally called an Authorized Use of Military Force (AUMF), came almost six months after the president began launching attacks against ISIS—first in Iraq, then in Syria.

The president’s proposal would allow airstrikes against the terrorist group or anyone supporting the militants but restrict the type of U.S. ground forces that could be deployed. President Barack Obama speaks on requesting Congress to authorize military action against ISIS, at the White House in Washington, D.C. on Feb. 11, 2015. Obama was joined by Secretary of State John Kerry and Secretary of Defense Chuck Hagel. (Photo: Kevin Dietsch/UPI/Newscom)

“It’s not the authorization for another ground war like Afghanistan or Iraq,” Obama said today while speaking to press.

James Phillips, senior research fellow in Middle Eastern affairs at The Heritage Foundation, said the president actually left himself “open to future use of special operations forces in an expanded role” beyond the missions in which they already are carrying out.

Whether that is considered putting “boots on the ground” is up for debate. Phillips said:

In my opinion, special operations forces should be considered boots on the ground. They wear boots and they are on the ground. But for political reasons, this administration doesn’t want to admit that.

In a letter addressed to Congress today, Obama attempted to further clarify the type of ground forces that could be used. He wrote:

It would also authorize the use of U.S. forces in situations where ground combat operations are not expected or intended, such as intelligence collection and sharing, missions to enable kinetic strikes, or the provision of operational planning and other forms of advice and assistance to partner forces.

Phillips suggested the language used in the proposal could be an attempt by the president to gain support from Democrats in Congress who have voiced concerns over the open-ended nature of the war authorization.

“There is certain language to appease his Democratic constituents,” he said. “The restrictions give Democrats cover to vote for this.”

Meanwhile, Republicans in Congress continue to push back on the effort, arguing against placing any limitations on the time and scope of the fight against ISIS.

“This [the three-year limit] could constrain the options of this administration and next. Unfortunately, ISIS will likely still be around in three years,” said Phillips.

To learn more about what’s inside the president’s authorization of military force, read here: