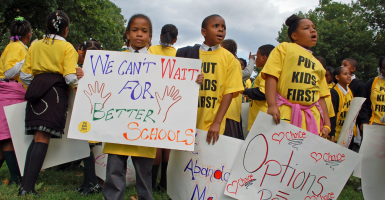 Barack Obama is a Washington, D.C., resident–and one with a high income. As he likes to openly admit, he’s one of the privileged one percent that he thinks can afford to pay more taxes.

As one of the “privileged,” Barack Obama enjoys all sorts of choices unavailable to  many middle class Americans and to  nearly  all of the poorest Americans. Accordingly, President Obama opted out of the Washington, D.C., public schools and sends his daughters to Sidwell Friends School, a first rate school with very high achievement standards. The Obama girls will surely benefit from this enriching educational environment. What parent wouldn’t want that for his children?

Which brings me to arguably the most unconscionable policy choice hidden in Obama’s $4 trillion budget: Obama proposed no funding next year for these vouchers.

The $20 million annual program, which began under George W. Bush, has proven extremely effective. Nearly 6,000 kids from lower-income families have benefited from these scholarships–which reach more than $8,300 a year for primary school and more than $12,500 a year for high school. That’s still about one-third lower overall than what it costs per pupil to educate students in Washington, D.C.’s public schools.

97.4 percent of the D.C. students who get the scholarship money are blacks and Latinos

So in a $4 trillion budget Obama couldn’t find $20 million for a program that indisputably works.

“The parents love the wide range of educational choices,” says Center for Education Reform president Kara Kerwin. “But President Obama just doesn’t support private school choice.” She adds that Obama has tried to shut down this education program every year.

Obama likes to say that he puts science over ideology, but in shutting down the scholarship program, he has clearly put ideology and political favoritism above reason.

Almost all – 97.4 percent  — of the D.C. students who get the scholarship money are blacks and Latinos. Even more would like to take advantage of the program: Every year four times as many D.C. minority children sign up for the voucher program as there are funded slots available.

The scholarships are popular with parents. Several years ago when Obama tried to shut down the program, black and Hispanic parents locked arm-to-arm with Republicans in Congress who support the program and marched in front of the Capitol. That was an amazing optic. In the 1960s and 1970s, civil rights leaders and “community activists” fought against laws that prevent blacks from getting in to the public schools.

Now liberals refuse to let them out.

Why Does Obama Oppose School Choice?

How can these private and Catholic schools out-educate the kids who go to well-funded public schools? Maybe money for the classroom isn’t the cure-all it is advertised as.

But private school choice doesn’t make public schools weaker as liberals fear. The money saved from kids attending private schools means more dollars per child for those who stay in public schools. This is a win-win. And competition always leads to higher, not lower, quality.

What is hopefully embarrassing to Obama is that some of the scholarship money goes to poor kids who want to go to Sidwell Friends. His girls sit in the same class rooms with these kids. If Obama succeeds, schools like this will be attended almost exclusively by kids of rich parents like Barack Obama.

Remember this the next time the president gives a lecture on income inequality and fairness.

The decision by this White House to defund the D.C. voucher program is a disgrace.

Republicans must go on the offensive on school choice. A quality education is the best anti-poverty program ever invented. This is the best path to reducing income inequality.

Rich liberals would never condemn their kids to rotten and dangerous inner city public schools. But they force these schools on the poor and minorities they pretend to care for. School choice, as Jack Kemp used to say, is the new civil rights issue in America.

Democrats are on the wrong side on this issue. They put unions ahead of kids. Let’s hope Republicans in Congress not only restore funding of this program but expand its budget so that every poor child in Washington, D.C., can get the same education that Barack Obama’s daughters do.