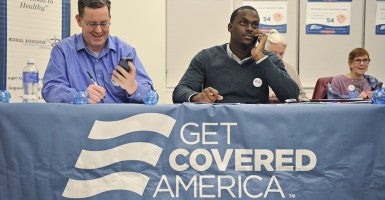 And with the co-ops receiving an average of $108.7 million from the federal government, taxpayer-backed funding per enrollee topped $17,000.

Twenty-three co-ops received a total of $2.5 billion from the federal government and enrolled more than 520,000 people in plans through September. However, an analysis conducted by The Daily Signal published yesterday found that just one, Maine Community Health Options, was profitable last year.

Using the latest quarterly filings for 22 co-ops, The Daily Signal examined how much money (in federal dollars) co-ops received per consumer who enrolled in a group or individual plan. On average, each co-op received $17,344 from the Centers for Medicare and Medicaid Services per enrollee. Data for New Jersey’s co-op, Health Republic Insurance of New Jersey, was not available.

The co-ops created under Obamacare received an average of $17,344 in federal funds per enrollee.

By comparison, an analysis conducted by Forbes after the end of the first open enrollment period found that taxpayers spent $4,633 per enrollee on the federal exchange. At that time, Centers for Medicare and Medicaid Services said more than 8 million had enrolled in Obamacare.

Former Sen. Kent Conrad, D-N.D., conceived the idea of Consumer Operated and Oriented Plans, or co-ops, during the debate over the Affordable Care Act in 2009. The nonprofit insurance companies are not new to the insurance market, and their inclusion was part of a compromise between Republicans and Democrats who disagreed over a public option.

Under Obamacare, co-ops were designed to inject competition into markets with limited insurance options. Through the program facilitated by the Center for Consumer Information and Insurance Oversight—a subagency of the Centers for Medicare and Medicaid Services—23 co-ops were created and received federal funding.

To assist the new insurers in getting off the ground, the federal government disbursed $2.5 billion in low-interest startup and solvency loans as of December.

Here’s a comprehensive look at how much in federal dollars the 22 co-ops received per enrollee.