How the D.C. Central Kitchen Became a Place for Second Chances and Fighting Hunger 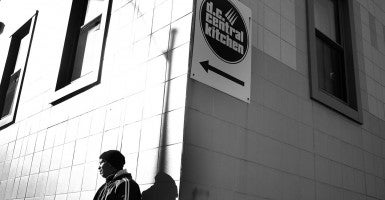 D.C. Central Kitchen has more than 5,000 volunteers a year come through the kitchen. (Photo: Douglas Graham/WLP)

Located just blocks from the U.S. Capitol, a local food kitchen in Washington, D.C., is changing the way people think about food distribution to those in need. Its success has lawmakers taking note.

Yesterday, the D.C. Central Kitchen played host to two House Republican leaders and a Missouri congressman. They were there to promote the Fighting Hunger Incentive Act, which the House will vote on this week.

The D.C. Central Kitchen, founded in 1989 by Robert Egger, was created to fight poverty and help end hunger through hard work and job training. Over the course of the past 25 years, it’s had its share of success stories.

Marvin Bushrod is one of them. He’s a chef at D.C. Central Kitchen who told The Daily Signal about how the program changed his life.

Several hundred people in homeless shelters have participated in its culinary program; 96 graduated last year. The program has a job placement rate of 93 percent.

About half of the graduates have a history incarceration before coming to the D.C. Central Kitchen. After their participation in the culinary program, however, graduates have a 2 percent recidivism rate.

In addition to helping prepare people for jobs in the culinary industry, the kitchen also provides meals for those in need.

The kitchen serves on average 5,000 meals daily to area homeless shelters, halfway houses and rehabilitation clinics. Approximately 6,300 meals per day go to students at 10 Washington, D.C., schools in low-income communities. The school foods program is one of three social enterprises run by the D.C. Central Kitchen.

That’s one reason Republicans visited the kitchen yesterday. This week, the U.S. House will vote on the Fighting Hunger Incentive Act. It makes permanent a tax deduction for businesses to donate food to charitable groups. The legislation also increases the maximum deduction from 10 percent to 15 percent. House Majority Leader Kevin McCarthy, R-Calif., who started his own small business, Kevin O’s Deli, at 21, was on hand to champion the D.C. Central Kitchen’s work. In an interview with The Daily Signal, he said the legislation would encourage more businesses to donate food.

Editor’s note: An updated version of this story includes additional information about the school foods program.